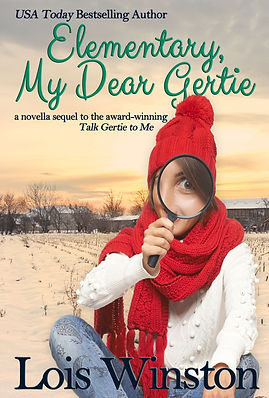 In this novella sequel to the award-winning Talk Gertie To Me, two years have passed since the happily-ever-after that isn’t doing so well. Nori Stedworth has moved in with the love of her life, Mackenzie Randolph, much to her parents’ displeasure. They’re coping as best as parents from Ten Commandments, Iowa can. They want Mac to make an honest woman of their daughter, and that means nothing short of marriage. Mac is all for exchanging I do’s. He’s even bought the ring, but before he can pop the question, an explosion hurls him and Nori right into the middle of a murder investigation. Gertie, Nori’s alter-ego, can’t help but lend her acerbic wit to the twists and turns as the town is turned upside down in the search for a murderer and arsonist, and yet another scandal envelopes the not-so-pious residents of Ten Commandments.