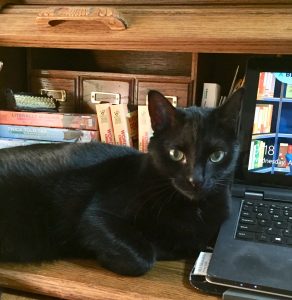 I have three desks in my home office.

Do I need three desks? No. Can I get rid of at least one of them? I’d like to but moving them into the office originally was hard enough. Wrangling even the smallest one out again would take a good week or more of packing up and rearranging. Besides, I’m a writer, and desks are a tool of the trade…not to mention handy lounging spots for the requisite cats who must hang out with me. Beyond that, those desks have become personal time capsules of sorts. Every so often, I dig through their drawers and find odd little things that I’d forgotten I had, but for some reason had felt compelled to hang onto. You know, because they might come in handy one day. 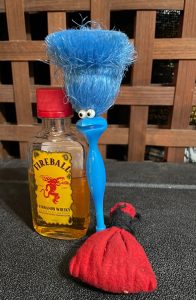 One item is a weird screen cleaner-slash-pen that I picked up at a long-ago writing conference. It looks rather like a Sesame Street ™ character with a shock of blue hair you use to brush away the dust from your computer screen. The pen doesn’t work – I’m not sure that it ever did – and one of the cats chewed the pen cap in the shape of feet, so that it doesn’t even stand up anymore. Why I’ve never simply tossed it in the trash, I’m not sure. Maybe because every time I run across it, I clean off my screen with it and think, oh, how handy.

I also have a quarter pint of Fireball cinnamon whiskey that a friend gave me stashed in one desk. It’s been there probably two years now, and it’s still 2/3 full. Good stuff, but a swig at a time is all I can manage. I save it for those late nights writing when I’m falling asleep and need something to jolt me awake again (they call it Fireball for a reason!). Definitely handy! I also have a gris-gris bag I picked up in New Orleans from a Voodoo shop…this while researching my first historical romance back in the 1990s. It’s supposed to bring me good luck (which everyone would agree would be handy). 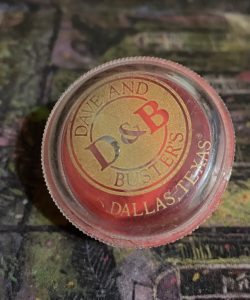 But the best thing I have stashed away is the cheapo plastic pencil sharpener that I won twenty years ago at a Dave and Buster’s restaurant by playing Skee-ball. If you’re not familiar with this old-style arcade game, it entails rolling a small ball up a ramp and “jumping” it into numbered rings for points. The more points you score, the more tickets come streaming out from the game’s ticket dispenser. Of course, you need hundreds of tickets to trade for one of the big prizes, and that night I only had enough to choose from the top shelf of cheesy rewards. Being a writer, I saw the pencil sharpener sitting with the other knickknacks and thought, how handy.

And, funnily, it really has been. Every so often my husband will whip out a pencil for a home repair project, discover its lead is broken, and call out to the heavens for a pencil sharpener. And, each time, I’m able to triumphantly dig out my D&B sharpener from my desk. In fact, if I were forced to get rid of all the accumulated “stuff” in all my desks, that sharpener would be the one thing I’d fight to keep.

Because it’s, you know, handy.

Do you keep stuff stashed away just in case? What kind of handy things are in your desk?