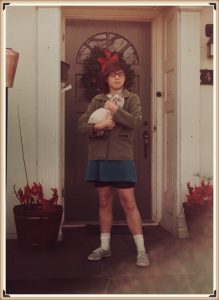 On Being the New Kid by Diane Stuckart

Back when I was in grade school, I envied the occasional kid who showed up as the official “new student” a couple of months into the school year. Class would be halted while said new boy or girl was brought to the front of the home room and introduced. From there, he or she would be taken under everyone’s collective wing, clustered about during recess, allowed to sit at the primo lunchroom table, and generally feted. By the time the school year ended, the newcomer had invariably joined the hallowed ranks of the popular kids.

I’d never been one of the popular kids, myself. Being a smart, poor girl in a rich school district (and a glasses-wearing introvert, to boot), I pretty much was guaranteed consignment to the school’s “out” crowd. I realized early on that my sole opportunity to move up in the social ranks would be at a different school. And so I prayed nightly that my family would move to another district in mid-year so that I could take my place in the spotlight as the new kid in class.

It finally happened in junior high. My dad’s sales territory changed, and we moved from Dallas to a suburb outside of Oklahoma City. Wish granted, right? Except that my parents, being ever practical, scheduled our move during the summer, so that my siblings and I would start school on time. Which meant when I stepped through the doors of Edmond Junior High School that first day of class, I was simply one of a score or more new students that year. So much for feting.

Which brings me to the here and now. Starting in September, I became a new kid at Booklover’s Bench, jumping in as a couple of familiar faces jumped out. And, finally, I’ve been feted! My fellow benchers have gone overboard in their welcome, making me feel right at home. I’m looking forward to a nice long tenure here, and to virtually meeting the wonderful readers who hang out with us.

So, tell me, have you ever been the new kid at school…and was it as good as I always imagined?