Favorite Places and Their History
by Terry Ambrose 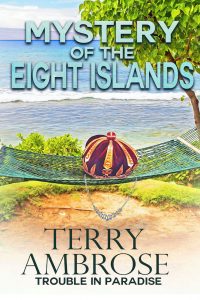 Have you ever visited a place for years and eventually learned something fascinating about it? In my case, that place was Hawaii and the something fascinating was the fall of the Hawaiian monarchy in 1893. The events of 1893 were nothing short of a coup designed to seize power from a reigning monarch. The story behind that coup reads like a political thriller filled with greed, corruption, and misinformation.

Finding the story for Mystery of the Eight Islands

The eleventh Trouble in Paradise Mystery launches in about a month. I’ve wanted to write this story ever since we stayed in Honolulu for the 2017 Left Coast Crime Convention, but I just didn’t know how to do it. During that trip, we toured Oʻahu and visited ‘Iolani Palace for the first time. Not only was I impressed by the restored beauty of the palace, but the roles some of the most prominent names in Hawaii played in overthrowing the monarchy shocked me.

The pieces of the puzzle came together at the beginning of this year. That’s when I read the story of George Ryan and the theft of the Hawaii Crown Jewels in 1893. Suddenly, the plot of Mystery of the Eight Islands became clear. I now had a way to weave history into the mystery. If you look at the book’s cover, you’ll see a crown featured prominently. That crown is a recreation by my cover designer of the real one that George Ryan plundered just months after the sugar growers overthrew Hawaii’s queen.

There’s always more to the story

It’s easy to see one side of a story. In George Ryan’s case, we’ll never know his side. Maybe he thought he had good reason to plunder the Crown Jewels. But in the events leading up to the theft, there are definitely two sides. The sugar growers were worried about their business and their livelihoods, and Queen Liliuokalani wanted to preserve the republic.

The beauty of history is that it can help us understand how a place became what it is. For me, the place that triggers my fascination is Hawaii. Your place is probably different, but that doesn’t mean I don’t want to hear your story. So leave a comment to let me know something fascinating about one of your favorite places and you’ll be entered to win a Kindle version of one of my books.

Leave a comment to enter. Contest closes on October 28 at 12:00 am. Winner receives one Kindle copy of any Trouble in Paradise Mystery, Seaside Cove Bed & Breakfast Mystery, or License to Lie thriller.