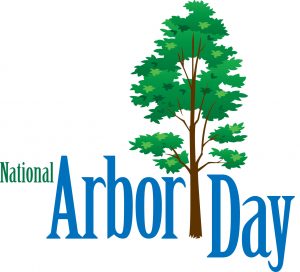 Tomorrow is Arbor Day, celebrated annually on the fourth Friday of April here in the US. The holiday has its roots (pun intended!) in Nebraska, where the 19th century pioneers who first settled there lamented the territory’s lack of trees. According to the Arbor Day Foundation’s website, Nebraska newspaper editor J. Sterling Morton (later secretary of the Nebraska Territory) led the call for an official day of tree planting in what would eventually become the Cornhusker State. The result of that first holiday was almost a million trees put into the ground. Morton’s idea swiftly branched out (hee hee!), and by 1920 Arbor Day was being celebrated by more than 45 states and territories. 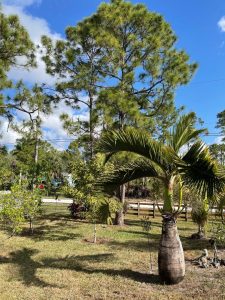 And, why not? What’s not to like about Arbor Day? It’s an unassuming holiday that requires no gifts, no greeting cards, no decorations. Moreover, it promotes a cause that anyone can get behind. If you choose to celebrate (and countless schools and communities do), all it takes is planting yourself a tree. Which I’ve done on more than one occasion over the years, though not necessarily on Arbor Day. (The accompanying pics are from my property…by the time this blog entry is posted all the trees should be fully leafed.) But lovely as the results are, landscaping is a lot of hard work…and even more so when you must keep up an image just as my cozy sleuth, Nina Fleet, has to do in my Georgia B&B Mystery series. 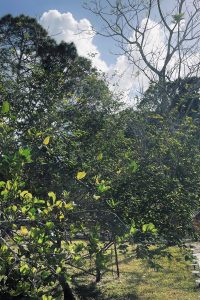 Fortunately for Nina, she has the services of the foul-mouthed gardener, Hendricks, whom she “inherited” along with the Queen Anne house which she has converted into a bed and breakfast inn. Hendricks never actually appears in any of the books—at least, not so far. But he is mentioned in each story, and his unseen presence allows me, the author, carte blanche to landscape my fictional property as elegantly as I want to without having to show my protagonist doing all the upkeep. So, what will we find in Fleet House’s gardens?

In addition to the requisite magnolia in the front yard, one outer wall of the rear detached garage is covered in climbing heritage roses. Those blowsy, fragrant blooms played a part in book 1, PEACH CLOBBERED. The property also features a fabulous Shakespeare garden…a large, circular raised bed with walking paths and a three-tiered fountain in its center. The garden itself is divided in quarters, each section devoted to plantings found in various of Shakespeare’s work. That garden was featured in book 2, PEACHY SCREAM. Of course, the peach tree in Nina’s backyard (quite possibly a holdover from a long-ago Arbor Day) gets mentioned in each story, mostly because Nina harvests its fruit to serve to her B&B guests whenever it is in season.

How do YOU celebrate Arbor Day? Do you eagerly plant trees, yourself, or would you prefer to have your own Hendricks to handle the landscaping while you kick back under the magnolia with a glass of iced tea? Anyone who comments will be entered to win a signed hardback copy of PEACHES AND SCHEMES. Comment by midnight Sunday, May 2, to be entered in the drawing.