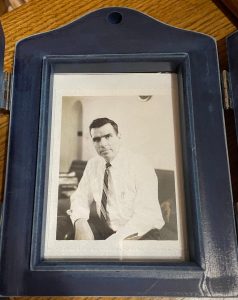 This coming Sunday is Father’s Day, but I won’t be visiting my dad to celebrate, considering that he has been gone for more than twenty years now. Still, I think of him often and even have a picture of him at my desk. To be totally honest, however, my siblings and I had something of a contentious relationship with him growing up; he came from an old-school way of raising offspring that included corporal punishment and not much in the way of praise. But Eugene P. Smart, a/k/a Gene was a hard-working, social, joke-telling kind of man who could fix almost anything mechanical and had a penchant for inventing. In fact, following my mother’s death I found in the family papers a draft of letter he’d written to President Lyndon Johnson during the Vietnam War. It included a sketch of a Leonardo da Vinci-esque armored shell designed to protect soldiers in the field from explosives. I’m not sure if that letter ever got to the President, but I suspect Dad’s invention would have worked if it had.

And, just so the Kardashians and their fellow influencers know, my dad actually invented the selfie. Yep, years ago my sister showed me a close-up photo that he’d taken of himself with his ever-present Polaroid camera sometime back in the 60s. Dad also came up with the idea of adding a level to a cordless drill to make it easier to drive a screw in straight. He tried to register his invention via a patent attorney who listened to his pitch and then inexplicably blew him off. And then, a couple of years later, Black and Decker began putting out drills with built-in levels. Coincidence? He didn’t think so.

In fact, one of Dad’s catchphrases had to do with keeping one’s eyes open for a million-dollar idea. He tried to pass on a couple of those to a younger me, but I’d not yet reached the stage in my life where I finally realized that the man was always right. And so, I declined an idea of a cookbook for men that was based on taking canned foods like Spam or baked beans and adding a couple of ingredients to them to make a meal. Of course, a year or two after I saw that exact cookbook in the local Barnes and Noble. 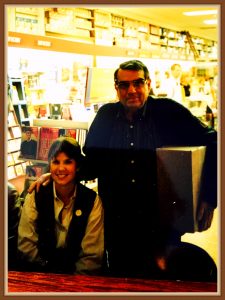 When he became ill in his final years, Dad suggested that I could haul in the dollars if I started a home healthcare company. Not having any training in the field, I let that one pass…and not long after all sorts of home care companies such as Visiting Angels became a booming industry.

But what I most recall about Dad was that even though he wasn’t much of a reader, he always supported me in my writing career. Once, back in my historical romance days, he came to one of my bookstore signings and bought ten books to give away to his friends. The store manager and my fellow authors at the event were more than a little impressed. I hope that if he were still with us, he’d be proud of my move into cozy mystery. Though, come to think of it, during the O.J. Simpson trial he told me I really should switch over to writing true crime if I wanted to make the big bucks! And, you know, he probably was right.

Do you have any special memories of your father or father figure growing up…or, for the dads out there, do you recall a memorable Father’s Day?

Also, while you’re here, check out our new contest for June! One winner may select one book from our vault of prizes. Print books must go to US mailing addresses. The contest runs from June 1-18. Click here to enter.