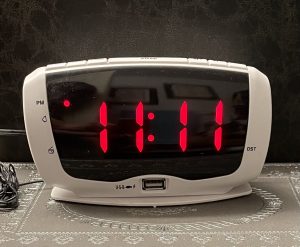 Even the most casual history buff will recognize this phrase from 1918. That’s the point in time when the Armistice between the Allied forces and Germany officially took effect. The agreement marked the end to fighting in World War I, though it wasn’t until months later that the Treaty of Versailles formally ended the war. The historic day is celebrated annually and is now known in the US as Veteran’s Day. Unlike Memorial Day, the holiday honors veterans both living and dead.

(A side note: My grandpa, Frank Smart, fought overseas in that war. He sent the embroidered “Souvenir of France” postcard in the photo to my Grandma Smart when she was still “Miss Anna Askren”.) 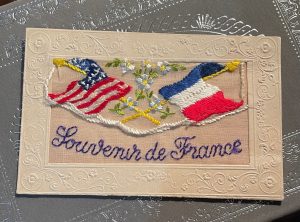 But while I respect the incredible importance of this day—a sincere thank you to all you veterans for your service—the writer in me has always been more intrigued by the story behind the whole 11/11 thing. Who chose that day and time, and why? Why not go with 10-11-12…the tenth hour, eleventh month, twelfth day? Did the men who brokered this armistice fight over when it should officially happen, or did they all agree that 11/11 seemed a lucky date? I couldn’t find that answer online, so if you know, please post the answer in the comments.

I was, however, able to find plenty of info about the whole “eleven” concept. According to a 2018 article published at Cecelia’s Psychics, numerology holds that “the number 11 is a master number and represents inspiration, illumination, and spiritual enlightenment.” Cecelia also claims that the number 11 (or 11 11) variously signifies awareness, connection to the angelic realm, and new beginnings. More specifically with the latter, she says that “11:11 is a number activation sequence.” Which might be why we get all excited any time we happen to look over at a clock at the exact minute when the numbers read 11:11.

Perhaps some of the signers of the Armistice were numerology buffs and felt the 11 11 11 combination boded well for peace to be maintained. Or maybe, aware of the significance of what was to happen, they simply opted for a date, time, and hour that rolled off the tongue and would look good in history books.
Or possibly the explanation is even more basic. 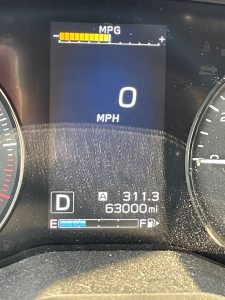 I think that in this chaotic world the order and simplicity of numbers has a huge appeal. Numbers are unchanging and, thus, are an ideal way of making sense of things. Even those of us who are mathematically challenged still cling to numbers when we need to set boundaries and parameters. And I know I’m not the only one to take a picture of my car’s odometer when it rolls over to an even number! The right numbers provide a sense of completion and satisfaction, which is what the eleventh hour, eleventh day, eleventh month sequence gives us. Too bad the peace didn’t hold forever…but we do keep trying.

Do you believe in synchronicity and the importance of recurring numbers…or are numbers simply numbers to you? Leave a comment for a chance to win a mobi file or Word ARC of FOOL’S MOON, first in the Tarot Cats series.