Digging through the mental recycle bin

By the time this blog post is published, I will have celebrated yet another birthday (nope, not telling which!). Once one has lived a decent number of years on this earth, one’s brain tends to experience the occasional bout of data overload (a far preferable term to the patronizing phrase, senior moment). It’s at this point that—to continue the computer analogy—a person has to de-frag and re-sort her memories, deleting the superfluous in the process. But, while the delete function churns away, odd memories tend to pop up from the mental recycle bin. That’s how I recently came to recall the YA book that helped cement my interest in the mystery genre. 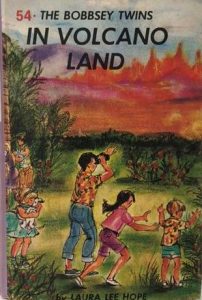 Of course, many of the books I read during grade school and junior high were mystery novels of some sort. (Though, I’m probably the only mystery author you know who has never read Nancy Drew or the Hardy Boys.) I cut my teeth on Encyclopedia Brown’s practically unsolvable puzzles and eagerly awaited each new Bobbsey Twins book, the modern editions of which usually featured a mystery. Once I hit sixth grade or so, I graduated to Trixie Belden, followed by Phyllis A. Whitney’s young adult stories. 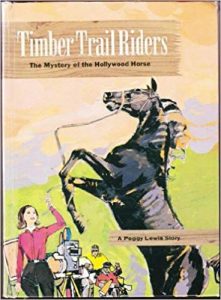 Most avid readers from my era will recall all these series. But, I bet I can stump you with the vintage title that’s been floating about in my recycles. Show of hands. How many of you who’ve been around for a while remember The Timber Trail Riders series…and, specifically, the book entitled, The Mystery of the Hollywood Horse?

Not too many of you, I see. I’m not surprised, since that book was randomly gifted to me at one of my few childhood birthday parties. But I remember it as a great tween mystery read. There were no dead bodies, but the storyline included the puzzling disappearance of a valuable equine, along with a fun look at the movie-making biz. Here’s the plot rundown:

Our teenaged protagonist, Peggy—a proficient young horsewoman who belongs to the Timber Trail Riders Club—is staying for the summer in California with her aunt and uncle. She helps coach a teenaged actress who is playing a young Alexander the Great in a film about that famous conqueror, and who needs help with the dangerous riding sequences. Not only does Peggy end up riding stunt double (guess back in the 60s, they didn’t worry much about child labor laws and insurance risk), she finds the missing horse, Cinder, who is one of the movie’s major stars. On top of that, she even manages a summertime romance. Sound like any cozy mysteries you’ve recently picked up?

I don’t recall if I ever read a second book in the Timber Trail Riders series, but I do know that The Mystery of the Hollywood Horse stayed on my personal library shelf until I went off to college. And it still remains in my memory banks as a fun read. The children’s classics are all well and good, but sometimes it’s the off-the-beaten-path books that have the greatest influence on we readers and writers.

So, is there a “non-classic” read from your childhood that you remember fondly?