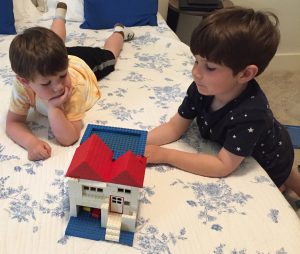 One day in 1979 my next-door neighbor Charlie asked if I’d like some LEGO for my sons. He was downsizing into an apartment in the city now that his kids were grown. Tiny plastic bricks weren’t exactly suitable for a toddler and preschooler, but I figured I could store them until the boys were older. A few minutes later Charlie returned with a 2-foot square industrial carton marked LEGO/SAMSONITE. Most people are probably unaware that LEGO had entered into an agreement with Samsonite in the early 1960s to market LEGO in the United States. (Check out this commercial from 1967: https://www.youtube.com/watch?v=krF2Xy5iuq4 ) When I opened the carton, I discovered several thousand classic red, white, blue, and yellow LEGO bricks.

LEGO has been part of my family every since. Not long after that day, we introduced the bricks to the boys and with supervision to prevent choking hazards, allowed them to unleash their creativity. I was amazed at how rapidly their small motor skills grew—as did our collection of LEGO because, as it turns out, you can never have enough LEGO. 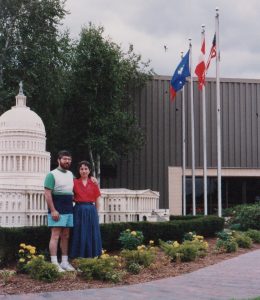 A few years later LEGO launched a tour of some of their creations, and we took our sons to John Wanamaker in Philadelphia to see huge models of everything from various national monuments to an astronaut that stood about eight feet tall.

In 1991, I was designing for a company that specialized in marketing needlework kits of national historic sites. The owner’s husband worked for the educational division of LEGO. My husband and I were invited on a private tour of their headquarters and factory in Connecticut. A giant replica of the U.S. Capitol stands at the entrance. The end tables and coffee table in the reception area were made entirely of LEGO, as were the name placards at the entrance of each office. The daycare center was built to resemble giant LEGO bricks. The factory was so immaculate that you could eat off the floor! 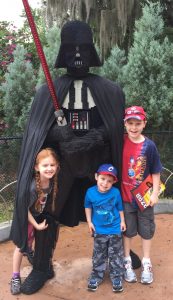 Then in 1999 LEGO secured a license from George Lucas to produce LEGO Star Wars kits, and LEGO sales skyrocketed. A few years later we welcomed our first grandchild into the world, and of course, eventually introduced him to LEGO. We now have five grandchildren, ranging in age from sixteen down to three. We took the three oldest to Orlando a few years ago, and along with spending time at Disneyworld, we had to go to LEGOland. 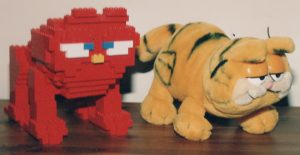 All five grandchildren are LEGO fanatics. You wouldn’t believe the amount of LEGO the Winston clan has amassed over the years. And of course, having recently dealt with several months of stay-at-home orders while watching our two youngest grandchildren in Nashville, we spent many hours with those iconic bricks.

Families pass down all kinds of traditions from generation to generation. LEGO has become one of ours. Does your family have a similar tradition? Post a comment for a chance to win an e-copy of any one of my books.