The Whodunit Gene
By Lois Winston 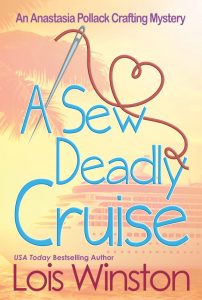 I have a knack for figuring out whodunit within the first fifteen minutes of most movies, five for hour-long TV shows. I consider it my superpower. However, I never blurt out the suspected perpetrator because I don’t want to ruin the show for my husband. Although, that doesn’t keep him from pestering me with questions about the killer’s identity. If I get annoyed and finally tell him whodunit, he says I spoiled the show for him! Damned if I do, damned if I don’t. It’s the story of my life. However, after decades of marriage, I think he’s finally learning not to ask—most of the time. Who says you can’t teach an old dog new tricks?

I once attended a screenwriting workshop where the instructor asked us to raise our hands if we’d figured out the ending to The Sixth Sense before the dramatic conclusion of the movie. Mine was the only hand that shot up. Not only had I figure out the ending ahead of time, I’d figured it out during the first scene of the movie. Was I the only person on the planet who put two and two together, having been bombarded for weeks by the trailer of Haley Joel Osment saying, “I see dead people”? Apparently so, but all seemed way too obvious to me.

When I read or watch a mystery, even if I think I’ve figured it out, I’ll keep reading or watching, hoping the author will prove me wrong. This does happen occasionally, and those are the mysteries I absolutely love. If an author can fool me, she’s got a fan for life.

The first mystery that ever stumped me was Murder on the Orient Express. As I sat watching the movie, to my utter shock and amazement, I couldn’t figure out whodunit! Not only couldn’t I figure out whodunit, but then Dame Agatha threw me one huge curveball of an ending. I remember thinking, “Well done!” 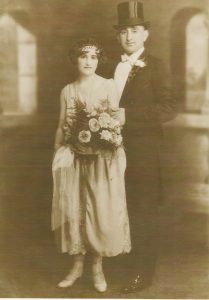 This knack for ferreting out whodunit is a gene I believe I inherited from my grandfather. (There is a whodunit gene, right? Grandpa Ben That’s him with my flapper grandma in their wedding photo) was the captain of a major metropolitan police force back in the heyday of gangsters and organized crime. He was responsible for helping bring down some notorious felons and was one of the first officers to arrive at the restaurant where Dutch Schultz was gunned down.

Dutch didn’t die immediately. He lingered for a while in the hospital with officers stationed at his bedside in the hope that he’d not only confess who shot him but perhaps a good deal more, confession being good for the soul. Unfortunately, Dutch died without giving up any of his secrets. 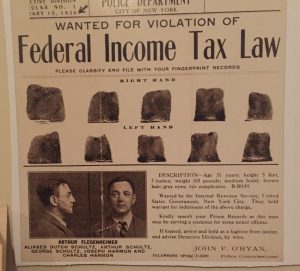 I’ve often wondered if my grandfather was one of those officers stationed in the hospital room. However, there’s no one left to ask, and unlike today, back then newspaper accounts rarely mentioned the names of officers who took part in investigations.

Grandpa Ben died shortly after my sixth birthday. I often wonder what he would think of my superpower and my career. I also wonder, if I had been born a few years later, would I have decided to follow in his footsteps and gone into police work? When I was contemplating a career, that option was never even on my radar. Instead I’ve settled for making up crimes for my amateur sleuth and readers to solve.

Are there any mysteries—either books or movies—that kept you guessing to the very end? Post a comment for a chance to win a print copy of Death by Killer Mop Doll, the second book in my Anastasia Pollack Crafting Mystery Series.

And don’t forget to check out A Sew Deadly Cruise, the ninth book in the series, now available for pre-order.  To celebrate the upcoming release of Anastasia’s newest adventure, The Anastasia Pollack Crafting Mysteries, Books 1-2, a 2-ebook bundle, is currently on sale through the end of the month for only .99 cents. Find Buy Links at https://www.loiswinston.com/anastasia-pollack-books-1-2.

And, while you’re here, be sure to enter our monthly book giveaway contest. One winner will select a book from our book vault. Print book winners must have US mailing address. Contest runs from September 1-18. Winner will be announced on Sept. 19 on the contest page. To enter, CLICK HERE.