I vs. Me
By Lois Winston

Peggy Riley Hughes, my seventh and eighth grade English teacher, was a grammar martinet. Her weapon of choice was a yardstick which she slammed against the blackboards that lined the front and one side of our classroom, metaphorically beating grammar rules into her students. As a result, those blackboards were pockmarked with tiny gouges. Rumor had it that she once shattered one of those blackboards. Occasionally, her yardstick would even come down on the desk of a clueless student. If you had Peggy Riley Hughes for English, you learned grammar—one way or another.

In My Fair Lady, Henry Higgins laments, “Why can’t the English teach their children how to speak?” Not a day goes by that I don’t think of that song and Peggy Riley Hughes. I may no longer remember the names of all the parts of speech or parts of a sentence, but I remember the rules Mrs. Hughes drummed into us. And I cringe every time I see or hear certain ones being broken.

I’ll be the first to admit I lost my reverence for the OED when they declared it was acceptable to split infinitives. Do you have any idea the reaming out I would have gotten had I dared to split an infinitive on a writing assignment?

But the breaking of the grammar rule that bugs me the most is when I see or hear a nominative pronoun being used in the objective case. For those of you who didn’t have a Peggy Riley Hughes in your life, the nominative case is the subject of a sentence. It’s where you use I, he, she, and they. The objective case is when a noun or pronoun is used as the object of the sentence. For pronouns, that’s me, him, her, and them. It’s the direct or indirect object of the sentence or the object in a prepositional phrase.

Yet I see the nominative being used in place of the objective in just about every book I’ve read for years now. It doesn’t matter if it’s a first time indie-published author or a multi-published New York Times bestselling author from a major publishing house. Maybe schools aren’t teaching grammar anymore, but wouldn’t you think editors would be schooled in proper grammar usage? 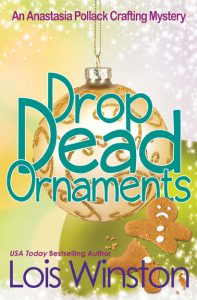 I admit, this is one of my major pet peeves. In the greater scheme of life, I suppose it’s a minor one, but it’s like fingernails on a blackboard when I read or hear an “I,” “she,” “he,” or “they” when it’s supposed to be a “me,” “her,” “him” or “them.” Maybe it’s a bit of PTSD from all those whacks of the yardstick from back in my junior high school days.

Do you have a grammar pet peeve? Share yours for a chance to win an e-copy of Drop Dead Ornaments, the seventh book in my Anastasia Pollack Crafting Mystery series.