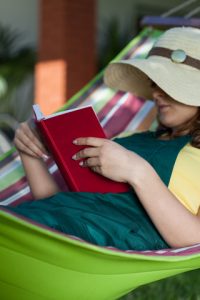 Here in the lazy south, afternoons are good for a short nap for those of us who are lucky enough to work at home. I get up very early to accomplish my writing goals for the day, so after lunch heralds the perfect break for reading or working on book marketing. More often than not, my brain is virtually floating on a cozy raft in our pool, while my eyelids droop with impending slumber. It’s easy to drift into a mental fog when the sun blazes overhead and sizzles the pavement below.

To combat this ennui, sometimes I’ll ingest iced tea or coffee so I can keep going. The energizing caffeine kick gives me a few extra hours of productive work time. I don’t dare sit on the patio, where my limbs seem to melt into the lounge chair, and I can’t get my mind to focus. So afternoons are best spent on pleasure reading, marketing activities, or other household demands. I might rally before dinner, but my plotting brain has already retired for the day by then and so has my ambition along with it.

How do you resist the afternoon doldrums?