Given a Choice About Murder and a New Bathroom 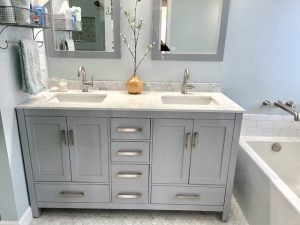 If you had asked me two months ago which I’d prefer, dealing with murder or getting a new bathroom, my answer would have been a no-brainer. Now, having endured the renovation from Hades, I’m not so sure. Murphy’s Law states that if something can go wrong, it will go wrong. And it certainly did!

First, it took several months to nail down a contractor. Many never returned phone calls. Of those who did, most never showed up to give us a quote. Or they showed up but never followed through with a quote. Or they all won the lottery.

We finally received three quotes and chose the contractor recommended by the tile store. We liked his attitude, and we didn’t have to worry about him taking our money, then not showing up, because he didn’t ask for a first payment until the job was nearly finished. Most contractors want 1/3-1/2 payment upfront.

Unfortunately, as conscientious as he was, some of his workers weren’t. One of them dropped a sander on the ledge of the brand-new bathtub, creating a one-inch dent. However, the contractor took responsibility and told us he’d pay for the repair.

The tub manufacturer recommended a repairman, who said, “When I’m finished, it will look like new.” He proceeded to make the damage worse. He came back a second time and worsened the damage further. He came back a third time with his boss, who increased the damage even more, then said, “This is as good as it’s going to get. Live with it.”

Excuse me? That one-inch ding in my tub had grown to a twelve-inch area that didn’t match the finish on the rest of the tub. So much for, “When I’m finished, it will look like new.”

The contractor gave me two choices. He could try to find someone else to repair the damage, or he could rip out the tub, the tile, and the pony wall and replace everything. He was visibly relieved when I suggested we start with the less drastic solution. He found someone who agreed to come out that afternoon. Turns out this second repairman knew the first repairman and his boss and had nothing good to say about them. He spent half an hour working on the tub, and now it really does look as good as new.

No more problems, right? Not exactly. The marble backsplash for the vanity arrived broken in half, the mirrors arrived scratched, and the shower fixture was missing the installation hardware. It took a week for the replacement parts to arrive. The next morning, after the fixture was finally installed, I stepped into my brand-new shower to discover I HAD NO HOT WATER. Turns out the cartridge that regulates the water temperature was faulty! Murphy was having a heyday with me.

And finally, there was the painter, one of the most incompetent, sloppy men on the planet. He kept getting wall paint on the woodwork and woodwork paint on the walls. Every time he came back to fix one of his mistakes, he created another. Worst of all was when he spilled paint on the newly tiled bathroom floor and tracked paint footprints on the hardwood floors in the bedroom and hall!

But aside from still waiting for the replacement mirrors, which are on backorder, everything is now finished. I’ve taken my first hot shower in my new bathroom and touched up the paint myself. All is right with the world—for now. We still need to hire a painter to paint the rest of the interior of the house, which hasn’t been painted since it was built eighteen years ago. I’m dreading this, but at least I know which painter I won’t be hiring!

And now if you’ll excuse me, I’m going back to the calming Zen of murdering people (on paper, of course!) If nothing else, my reno experience has given me lots of ideas for future victims, starting with a sloppy painter!

Do you have a home repair horror story? I’d love to hear it. After all, misery loves company!

Also, while you’re here, check out our March contest. It runs from March 1-18. One lucky winner gets to select a book from the prize vault. Winner will be announced on March 19. Here’s the link:  https://bookloversbench.com/contests/