On October 18, my new Beachtown Detective Agency series launches with the release of The Case of the Amorous Assailant. The main character is Jade Cavendish, who is twenty-six, spunky, and not quite ready to call herself a grown-up. But after inheriting the family business, Jade figures she’d better hurry up. In honor of Jade’s debut, I thought I’d give you a little tour of the location where the agency is located, Carlsbad Village. 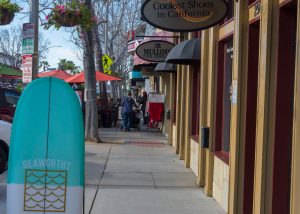 If there’s one thing you can say about Carlsbad Village, it’s that the Village has attitude. Home to Tamarack Surf Beach and the Carlsbad Sea Wall, there are also plenty of restaurants and funky little places to shop. You won’t find many chains here. You’re far more likely to wander into a cute little boutique with a name like 75 Degrees and Fuzzy. Carlsbad Village doesn’t do mundane. Here, it’s all about being unique.

And the galleries? We’ve got them. Line art, paintings, and all sorts of art are represented in funky little stores that bear no resemblance to anything you’d find in the big city.

The ocean is Carlsbad’s neighbor

I’ve attempted to capture the nature of Carlsbad in the Beachtown series. Surfing and the ocean are major influences and there are plenty of ocean sports and surf shops in town. One of the fun outdoor attractions is Carlsbad’s seawall, which meanders along the ocean. From early morning to evening (when you can gawk at the amazing sunsets) it’s bustling with walkers and joggers. The surfers, not to be outdone, can be found most days bobbing in the ocean while they wait for their next wave or, if they’re lucky, getting an actual ride.

While you’re here, stop by to enter our monthly contest on our Contests page.

Right now, the Kindle version is on sale at Amazon for the special introductory price of $0.99. Click here to reserve your copy.