Oh, the Bubbaness of it all! 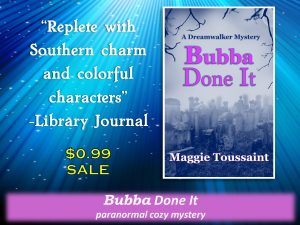 When I wrote BUBBA DONE IT, I broke one of the primary rules of the amateur sleuth trope. It was unthinkable really, except there wasn’t any way to proceed without telling whodunit in the first chapter.
After all, my female sleuth, Baxley Powell, was just starting out in her police consultant role, just feeling her way through the realms of what she could and could not do in this world and the next. She meant to wait outside the bankers house as the sheriff asked, but things happened and she needed to not be alone. Everyone should understand that, especially the man in charge. 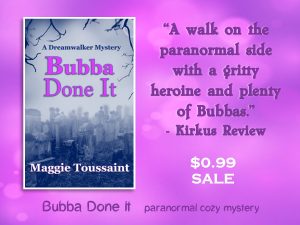 However he took a dim view of her seeing the crime scene, of her hearing the victim’s dying phrase, the one in which he shared exactly who planted the knife in his chest. “Bubba Done It.”

That big reveal should have made matters easy peasy, but instead they threw a big old mess of worms all over everything. You see, in the Deep South, the nickname of Bubba is about as ubiquitous as Hon, Dear, or Love. Though it generally applies to those of the male persuasion, my family had an Aunt Bubba. So it is in fact one of those gender fluid names and can apply to anyone.

It can be a term of endearment or a slang term of disparagement, with meanings as diverse as easygoing, companionable, assertively masculine, uneducated, bigoted, violent, etc. 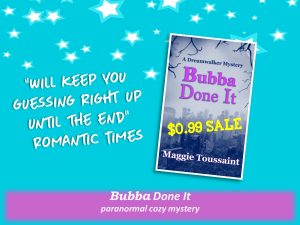 Which brings us back to the dead man. He wasn’t known around town as a nice guy. If the bank was letting you know you’d skipped a payment on your car, boat, trailer, home, RV, or whatever, the dead guy called you, before he died, of course! He was the face that people really didn’t want to see.

Thus he had a whole town full of people who didn’t care for him, and more than a few of those were called Bubba. Good grief! The sheriff quickly trimmed the suspect list to include a down-on-his-luck fisherman, a crackhead evangelist, a politically-connected investor, and Baxley’s brother-in-law, the former sweetheart of the new widow.

The clock is ticking. Will Baxley find justice for the banker?

Share a nickname from your circle of family and friends for a chance to win a digital or print copy of Bubba Done It. Print winner must have a US mailing address. Winner announced on July 6.

Also, our July contest opens July 1 and is live through July 18. The entry link will be live on July 1. Winner will select a book from the book vault. If a print book is selected, the winner must have a US mailing address. ENTER HERE.