Like most people, I’ve received quite a bit of advice in my life. As a kid, it was everything from “Look both ways before crossing” to “Pick your friends, not your nose.” Some advice I took to heart, some I completely ignored (until I matured and learned its value), and some worked for a time but eventually had an expiration date. I also learned that some advice, no matter how well-meaning, is often wrong. 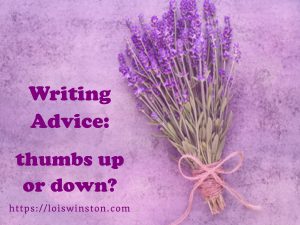 The same can be said for writing advice. As I was honing my craft, I was bombarded with writerly advice, always given with the best of intentions, but as I later learned, often misguided. The misguided advice usually came from other unpublished writers who passed along information they’d heard at workshops and conferences. Unfortunately, they often took this advice out of context or misheard what was said.

One time, an unpublished writer gave me a low score on a writing contest because she’d heard an editor state that in a romance, the hero and heroine must meet within the first five pages. My hero and heroine didn’t meet until the end of the first chapter. If the editor had made such a pronouncement, I’m willing to bet it was in reference to the 50,000-word short romances she edited for Harlequin. I had written a 100,000-word romantic suspense.

Another piece of erroneous information that was constantly bandied about referred to words you should never use, like “was” because it’s passive voice. There’s a big difference between a passive verb and passive voice. “Was” is a passive verb. You can often substitute it for an active verb to improve your sentence. However, “I was sad” is not passive voice. Passive voice is when a subject is acted upon rather than doing the acting. Sometimes the judicious use of a passive verb is the best way to state what needs to be said at the moment to keep the story moving.

There is one piece of writing advice that I swear by, though. It was first told to me years ago by the owner of the agency that represented me, and it’s the best writing advice I’ve ever received:

Every scene in a book, whether narration or dialogue, must do one of two things, either advance the story or tell the reader something she needs to know about the plot or character at that moment. If the scene or dialogue does neither, it’s filler and doesn’t belong in your book.

Too often writers will fill their books with long passages describing the scenery or a character’s clothing. There’s a place for description. The scenery sets the mood and often becomes a character in the story. For example, a story taking place in an isolated village should have a different feel from one taking place in a bustling metropolis. How a character dresses or the extent of his grooming will tell us much about him.

However, when a writer drones on for paragraphs or even pages of description, it pulls the reader from the story. That’s never good. A well-written sentence or paragraph of description is far better than longwinded descriptions that go on for pages and become the writing equivalent of “everything, including the kitchen sink.”

The same is true for dialogue. As humans, much of our daily conversations are filled with nothing but chitchat. Although writers strive to write dialogue that’s realistic to the characters they’ve created, it’s best to cut the chitchat and get right into the meat of the discussion without including what might normally occur when two people meet in real life:

This is the type of dialogue that will leave readers gritting their teeth, especially if in the end, there was no point to the conversation. It neither advanced the scene, nor told the reader something important she needed to know about the characters or the story. So what is the point of it? There is no point—and that’s my point. 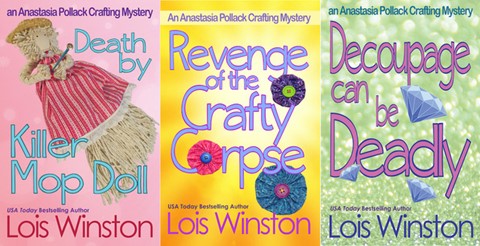 Do you have a piece of life or writing advice to share? Post a comment for a chance to win a print copy (U.S. only) of either Death by Killer Mop Doll, Revenge of the Crafty Corpse, or Decoupage Can Be Deadly, books 2, 3, or 4 from my Anastasia Pollack Crafting Mystery Series.

Also, while you’re here, check out our May Book Vault Giveaway! One winner will select the book of their choice from the vault offerings, with print books only available for US winners, though most books are in ebook format as well. The contest runs from May1-18. ENTER HERE.

34 thoughts on “The Best Writing Advice I’ve Ever Received”