Read an excerpt from Saving Scott, book 3 in Terry Odell’s Pine Hills Police romantic suspense series. Readers of the book also can enjoy the collection of recipes featured in the book. 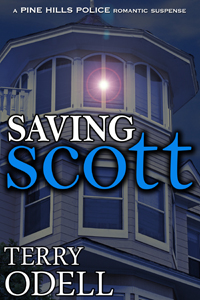 Scott slapped at the alarm, grimacing as his sore shoulder protested the sudden motion. He lay there, panting, filmed in sweat, waiting for his heart rate to drop. Slowly, he took in his surroundings. Pine Hills. His new apartment. His bedroom. Hints of sunlight filtered through the gap between the shades and the window’s edges. The encroaching daylight chased away the nightmare.

He lay there, breathing slowly. Staring at the ceiling. Working up the guts to move, knowing the pain was waiting when he did.

As always, the need to pee forced the issue. He gritted his teeth and pushed himself to a half-sitting position. Waiting for his muscles to accept his demands.

At least you can do this on your own. No calling for a nurse.

He limped to the john, took care of what had to be done, and leaned against the counter. More slow deep breaths. He splashed his face with cold water, brushed his teeth and found the swim trunks he’d laid out last night. He closed the lid on the toilet and sat there, working his good leg, then his stiff one into the trunks.

Be glad you can dress yourself. Suck it up.

The gentle gurgling sound and the aroma of fresh coffee brought a faint smile to his face. At least he’d had the brains to set the timer on the coffeemaker before going to bed.

He stood, yanking the nylon swimsuit over his hips. Limping around the boxes he’d brought over last night, he made his way to the kitchen and savored that first sip of that first cup of coffee. Nothing better. He sniffed again. Chocolate? He’d noticed it last night, too.

He opened the oven and gave another sniff. Not the source. No matter. As residual smells went, chocolate sure beat cigarette smoke or eau de litter box.

After setting the cup on the counter, he took a few tentative steps around the kitchen, loosening up muscles that had stiffened overnight. When he could step without gnashing his teeth against the pain, he grabbed a towel, slipped his feet into rubber sandals and headed for the fitness room.

Opening the door to the fitness center, he smelled the mixture of sweat, disinfectant and swimming pool chemicals. He shuffled to the hot tub and spent a minute figuring out the controls. Climbing in took some doing, but at last, he surrendered to the heat and pulsating water. Head back against the side of the tub, he closed his eyes.

Damn, he should have brought his watch or phone and set an alarm. Mornings sucked. He glancing around the room, noticed a clock on the far wall. That would help, as long as he stayed awake. His gaze took in someone stepping onto the treadmill in the far corner. She had the obligatory ear buds in, and seemed oblivious to anything else in the room.

Her brunette ponytail bounced as she ran. Her ass was hidden beneath baggy sweats. After about ten minutes, she shrugged out of her hoodie, revealing the sports bra she wore underneath. Not bad. She had some meat on her. Not one of those twig-thin numbers you were afraid you’d break if you got too close. Not that he had any intention of getting close to anyone in Pine Hills. But he could look.

Maybe living here wouldn’t be so bad. He dozed off and on, the buzz of the jets and bubbles blocking out any extraneous noise. When he’d gone well into prune territory, he hauled himself out of the tub, pleased with his increased mobility. Treadmill woman had already left. Her replacement had a bit too much meat on her for his taste. He avoided eye contact, although she, too, was engrossed in whatever came through her ear buds.

Drying off, then wrapping the towel around his hips, he left the fitness center, barely limping. As he approached the door to his apartment, the smell of chocolate intensified. Curiosity aroused, he followed the aroma past his apartment. It definitely emanated from the unit next to his. His stomach growled, reminding him he hadn’t eaten since his early pizza dinner yesterday, and he turned back to his own place.

He showered, shaved, and put on the plush robe his sister had sent when he’d been in the hospital. Pulling on his customary sweats still hurt too much to be worth it. Wearing a robe made him feel old as his grandfather, although his grandfather probably wouldn’t have gone for the handcuff print. But Scott didn’t want to risk spattering bacon grease on his work clothes. Or bare skin. Been there, done that.

Enough with this pity party. Cook, eat, and face your first real day on the job.

He was washing the dishes when someone gave a gentle knock on the door. Who knew he was here?

He dried his hands and checked the peephole. A distorted image of a brunette woman appeared. Belting his robe a little tighter, he opened the door. “Yes?”

“Hi. I’m Ashley. I live next door. I thought I’d … um … welcome you to the building.” She extended a platter covered in foil.

As he tried to process all the possibilities—she had a bomb under the foil; she was a reporter wanting yet another story; she was scoping out his apartment for a future burglary—he accepted the obvious. She was a neighbor being friendly. He found the wherewithal to attempt the same.

The platter was warm to the touch. “Thanks, I’m Scott.” He lifted the foil and discovered the source of the chocolate smells. “These must be what I’ve been smelling since yesterday.”

She nodded, keeping her eyes on his, backing away. “I should let you go. I have to get to work.”

“Share them. I’m opening a new bake shop, and I’m testing recipes. I already eat too many of them. Thank goodness for the fitness center downstairs, or I’d be a total blimp. I have to go, really.”

His brain kicked into gear. She was the woman who’d crashed into him yesterday, and the first one he’d seen on the treadmill this morning. “Thanks. I can take them to the station.”

“Please do.” Stepping away, she spoke over her shoulder. “And if they like them, you can tell them my shop, Confections by Ashley, will have a lot more.” She paused, as if what he’d said had reached her brain. “The station? Where do you work, if you don’t mind my asking?”

“At the police station.”

Her gaze moved from his face downward, then back up. He realized she was looking at his robe. What had she thought? That he was into bondage games?

And, be sure to “Like” Terry Odell’s Facebook Author Page. As soon as she gets 1500 Likes, she’ll give away a box of gently read books.