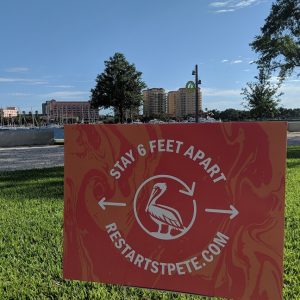 Earlier this year St. Petersburg, Florida declared the pelican as the official bird of the city. It’s been the unofficial bird for decades. It has adorned recycling bins, trash cans, and city promotional materials since the 1980s.

A new sculpture at the entrance to the renovated pier is a large, origami style red pelican. In addition, there are about ten red metal life-like pelicans scattered throughout the space. 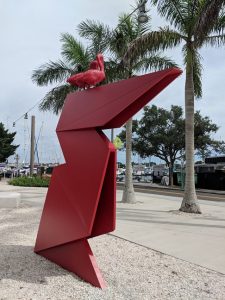 According to the Florida Fish and Wildlife Conservation Commission, the brown pelican is the smallest of six species of pelicans around the world. You can see these seabirds throughout most of Florida’s beaches, particularly over here on the state’s west coast. The brown pelican is protected by the Migratory Bird Treaty Act and is listed as imperiled. 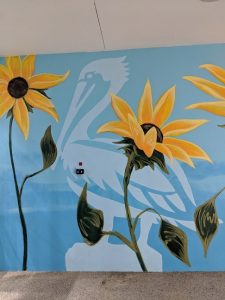 The pelican has also made itself a common feature in the murals around town. This latest one is only about three weeks old as a result of the #HappyMural project. Well done!

The bird has already been an unofficial symbol of the city for decades, but Mayor Rick Kriseman’s administration made it official January 9, 2020. An outline of the indigenous bird is already on the city’s flag and the city’s official seal.

It brings to mind the famous limerick by Dixon Lanier Merritt: 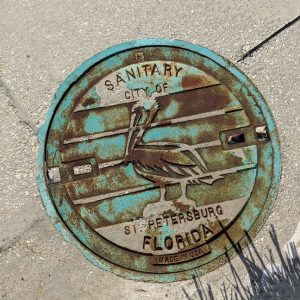 “A wonderful bird is the Pelican.
His beak can hold more than his belly can.
He can hold in his beak
Enough food for a week!
But I’ll be darned if I know how the hellican?”

As St. Petersburg is the setting for the books in my Webb’s Glass Shop Mystery Series, I’m going to find a way to slip a pelican into my next book.

Does your town have a symbol?