Who doesn’t hate spoilers? Not me…sometimes. It depends on whether or not I have a vested interest in the movie/book/TV show being spoiled. As I’m writing this, we’re just a few days past the series finale of Game of Thrones. Confession time…though I’d read articles about the show on the internet for years, I had never watched a single episode. Then came the final one, along with the penultimate chapter that aired right before it. Since the spousal unit had left the TV tuned to HBO, I sat down and finally watched. But had I not seen the GOT ending, you bet I was going to read all the spoilers next day. Same thing with Avengers: Endgame. Haven’t seen it, probably won’t unless it shows up on cable and I’ve got a spare hour or three to watch. And so I’ve read all the spoilers I can find. This means I’ll bring a box of tissues to any eventual viewing because I know that [REDACTED] dies in the end.

On the other hand, I was very careful to stay off the internet until I’d had a chance to view a few critical episodes of The Walking Dead so that I didn’t learn in advance who ended up zombie-fied. And, years ago, I managed not to read about the end of The Sixth Sense so that I was truly surprised when THE BIG SECRET was revealed. I would have been outraged had someone deliberately told me that crucial bit of info before I had a chance to enjoy the shocking denouement. But had I inserted myself into a conversation with folks discussing that movie before I’d seen it, it would have been on me if I got “spoiled”. 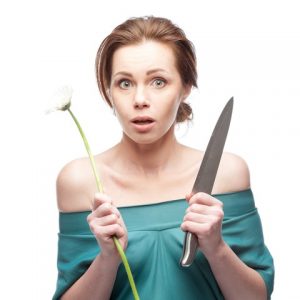 Bottom line, when it comes to spoilers, intent matters. It’s one thing when someone accidentally lets critical plot points slip. (One of my favorite scenes from the old Happy Days series is when the Cunningham family is heading out to see the movie Psycho and—SPOILER ALERT!—Ralph Malph unthinkingly blurts out something to the effect that Tony Perkins is his own mother.) It’s another when someone deliberately leaks important twists to, well, spoil the experience for someone else. Which brings me to book reviews.

Most reviewers are good about revealing just enough plot to get a potential reader interested while keeping the twists and turns a secret. But not always. I’ve had reviews that revealed critical information about the killer and, almost as bad, revealed who the murder victim is. My publishers have always been lax about the latter with their back cover copy; this despite the fact that I try to make the victim’s identity a bit of a surprise in my books, since my murders don’t usually happen until a few chapters in.

With that, here’s hoping that everyone who reviews a book from here on out will keep the spoiler conundrum in mind. Be mysterious! Don’t tell whodunit…or even “who got it”…when you post that review online. Keep your readers guessing, just like we authors try to do. I promise you, it’s much more fun to know and not tell, than to know and spill!

So, has anyone ever accidentally (or on purpose) spoiled a book or movie for you?

After July 1, check out our July contest. Enter for a chance to win a free book from the vault (US only mailing addresses). Click here to visit the contest page.