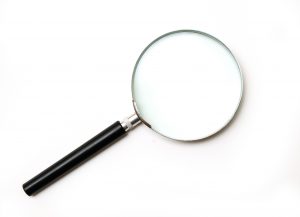 One of the most exciting things with every book you publish is seeing your cover art for the first time. I’ve been incredibly fortunate in that, for many of my novels, I’ve been able to contribute ideas for the cover (they’re not always used, but I do get asked). Sometimes, I even get to see the artist’s concept sketch in advance so I can suggest changes before the scene is set in stone, er, ink. And I must admit that the greatest number of my book covers have been lovely pieces of art.

But not always
.
Most savvy readers are aware that we traditionally published authors rarely have the final say over our cover art. (Of course, I’m exempting James Patterson and J.K. Rowling and Stephen King and others who breathe that rarefied publishing air. They veto a cover, and it’s vetoed!) Instead, the cover design is a collaboration between the editor and marketing group and artist, sometimes with input from the author. Most times, the artist gets it right…but sometimes, they get it wrong. And usually by the time the author finds that out, it’s too late for her to do anything but gnash her teeth and pray the next book cover is better.

Of course, getting it waaaay wrong can actually boost an author’s profile. Just ask bestselling romance author Christina Dodd. Back in the 1990s, she learned that her just-released historical romance unfortunately featured on its cover a beautiful heroine who happened to have three arms. Yep, the art department fell asleep on the job and screwed up big-time on that one…and no one caught it until the book was already on the shelves! But Ms. Dodd savvily parlayed that hysterically awful mistake into a major marketing tool, and I suspect that her unanticipated notoriety lent a real boost to her career. 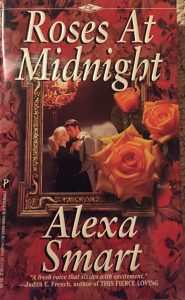 I’ve never had any extra appendages show up on my book covers, but I’ve had a few things go wrong…some fixable, and some not. The first of my historical romances to have the traditional “clinch” cover featured a heroine whose auburn hair was mentioned quite frequently throughout the story. Unfortunately, I discovered when I received my author copies that the woman on the front was a blonde. Don’t get me wrong, it was a gorgeous cover, but that glaring error was noticed by many a reader. 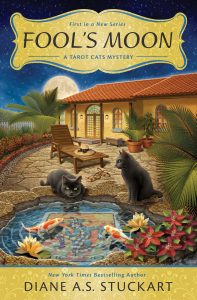 On a more fun note, the original “Hamlet the Cat” featured on my Black Cat Bookshop mysteries was first drawn as a cute fluffy kitty. I saw that and hurriedly reminded my editor that Hamlet was pretty much a bad boy feline. And so the artist obligingly added a bit of “snark” to Hamlet’s expression that captured him perfectly. My Tarot Cats mystery, Fool’s Moon, has my protagonist’s house on the cover. The artist got the style and color right, but for artistic purposes made it a single-story building instead of a two-story home as in the book. Sure enough, a couple of readers pointed that out. Fortunately, the two black cats on the cover are dead ringers for the kitties in the book.

My most recent series, the Georgia B&B Mysteries, has a bit of a bobble on the covers, too. The books all feature the story’s resident Australian shepherd, Mattie, front and center, with the titular B&B in the background. The covers are fab, and the pup is cute as she can be…except that the artist made her a fluffy-tailed Border Collie instead of a bob-tailed Aussie. Oh, well.

So, have you ever seen something amusing or shocking or just plain wrong on a book cover?

Also, while you’re here, click over and check out our August Book Vault giveaway, which runs Aug 1-18. You could win the book of your choice from our vault! CLICK HERE