I’ve recently seen a trend in novels toward main characters who are billionaires, or at least independently wealthy. While that makes for an easier character to draw (they don’t have to go to work), my preference is for hard-working folks. A hard-edged cop or a fireman struggling to get by, both with built-in conflicts with people afraid they won’t come home from work on a given day. I’ve been reading an author who writes strong male (alpha) characters, and she always takes us along on a day in their work lives. I find those stories infinitely more interesting than the ones with the misunderstood rich guys.

With that being said, I’m currently reading a novel that contains a slew of wealthy characters. A family and the folks they encounter (each family member has their own book). The books do present both sides of wealth – the cockiness that wealth brings and the misperception that can also be a part of the money – and so far, I’m not being off-put by the flash of cash in the sample of the series that I’m reading. It is a little tiresome that all the family members have close encounters with famous people, however. One’s a movie star, one’s a rock star, one’s a pop icon.

At the last writer’s conference I attended, the agents and editors who spoke did raise this trope as one that is highly popular. It’s not enough to write about wealthy people, they have to be obscenely rich. Millionaires are a thing of the past. They have to be billionaires.

When you read a book, does a character’s occupation draw you in? Turn you off? 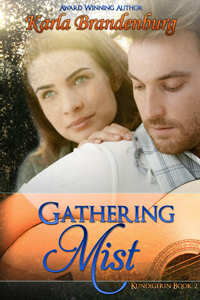 In my latest novel, Gathering Mist, my hero is a rock star, but I haven’t directly addressed the matter of his wealth. Likewise, my heroine has also become independently wealthy as a result of an inheritance, but both of them come from humble beginnings and the conflict isn’t the money as much as their history together (during the leaner times). I didn’t intentionally write wealthy characters, but I did want to write the rock star since it fit the model I’d chosen for my hero.

Most of my characters are more the “everyday” variety. A meeting planner, a mortgage broker, an advertising executive. I prefer characters I can relate to (and yes, in Gathering Mist, the rocker was someone I could relate to. It might have been better to show the reality, which is that most aspiring musicians don’t hit the big time).

What kind of characters do you like to read about? Do you prefer the fantasy of being swept off your feet into a glamorous world of wealth and privilege? Or do you like reading someone else’s everyday life and what makes their lives interesting, the challenges they face on a daily basis?

Thanks for stopping by.

Leave me a comment and you’ll be entered into a drawing to win your choice of my two most recent ebooks – a story about wealthy characters (Gathering Mist), or working-man characters (Return to Hoffman Grove).