So Not a Norman Rockwell Thanksgiving
By Lois Winston 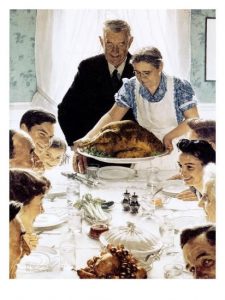 For much of my life I dreaded Thanksgiving. Inter-generational family gatherings were rare during my childhood. My father was barely tolerated, not only by my mother’s family, but also his own. My paternal grandfather was one of thirteen children. My father had dozens of cousins, most living within close proximity, but I never met any of them because no one wanted to be around my father—for good reason. I could give you a long list, but let’s just say it’s too bad we can’t choose our parents.

For some reason, maybe due to guilt, every Thanksgiving we’d be invited to either my maternal grandmother or aunt’s home. However, the visits were never enjoyable. Even as a very young child I noticed the tension. You could slice it with the turkey carving knife. I don’t know why my grandmother and aunt kept inviting us, but they were saints for doing so.

I escaped my dysfunctional family when I went off to college. After I married, I thought I was becoming part of a “normal” family. But maybe there’s really no such thing. My mother-in-law was not only an extremely difficult person to get along with but also an old-school communist. That’s a story for another day, though. (If you’re really curious, read my Anastasia Pollack Crafting Mysteries. Anastasia’s communist mother-in-law is based on my experiences with my own mother-in-law.)

But back to Thanksgiving…for the first ten or twelve years of my marriage, my husband’s maternal grandmother hosted Thanksgiving at her extremely large apartment in Manhattan. These were huge family gatherings, the number of attendees growing each year as additional cousins married and great-grandchildren began arriving.

When my husband’s grandmother passed away, much to everyone’s chagrin, his mother announced she was taking over Thanksgiving hosting duties. The annual gatherings quickly became much smaller affairs. My husband’s siblings, who had moved to other parts of the country, made excuses for not traveling during the holiday. His cousins decided to start their own family traditions. I suspect, though, that the real reason people dropped out in droves was because they’d all previously eaten my mother-in-law’s cooking.

My mother-in-law prided herself on her expert culinary skills, which she bragged surpassed those of Fannie Farmer. (Is there really a Fanny Farmer? Or is she fictitious like Betty Crocker? I have no idea.) Anyway, she refused to follow directions because as a self-proclaimed expert on everything, she always knew a better way.

Normally, I find it easy to ignore know-it-alls, but when it comes to eating food they’ve cooked, that can have severe repercussions. For instance, my mother-in-law roasted all forms of poultry by time only, never bothering to use a meat thermometer. Most people fight over the drumsticks, but the only reason none of us ever came down with food poisoning is because we knew only to take the outer slices of turkey. The drumsticks wouldn’t be safe until they were reheated as leftovers.

But as much as my mother-in-law undercooked her poultry, she overcooked her vegetables–in a pressure cooker, for at least half an hour, sometimes longer. No crispy, brightly colored veggies for that woman!

Then there were her pies. Her piecrusts, which she made with lard, were exceptional, according to her. The rest of us found the crusts under-baked and greasy. They’d land like lead weights in your stomach.

Truthfully, I don’t remember how I eventually managed to wrest Thanksgiving away from my mother-in-law, but I did, much to the relief of everyone else and before any of us wound up in the Emergency Room.

What about your family Thanksgivings? Were they Norman Rockwell events or more like a Nightmare on Elm Street?