From Nurse to Writer

People ask me if I’d ever considered writing a mystery series about a nurse. This is because I worked in nursing for ten years before I got married, had children, and retired. As a registered nurse and holding a master’s degree, you’d think I would have steered in this direction when planning my first mystery. But I like to write humor and didn’t regard nursing as anything funny. It wasn’t humorous in my mind to write about sick people and a stressful occupation.

However, my nursing background sneaked its way into my Bad Hair Day series featuring hairstylist Marla Shore. My critique group has told me many times that I’m too clinical in medical descriptions. I know if someone has a head injury that they’re not going to bounce right back up again. And if you get a wound, you’d better treat it so as to prevent infection.

But I had special fun when I sent Marla into an undercover role as a nurse’s aide to wealthy Miriam Pearl in Body Wave, #4 in the series and recently released in a newly revised Author’s Edition. Not only does Marla forget to set the brakes on the old lady’s wheelchair at the top of a hill, but she doesn’t know how to use an old-fashioned thermometer. Consider this scene that I found immensely entertaining to write. Marla is getting her client ready to go to dinner downstairs with the family.

“You’d better check my temperature before going to all this trouble,” Miriam advised after fitting in her teeth. “You wouldn’t want me getting worse sick by going downstairs.”

“It can’t do you any good to stay in bed all day,” Marla muttered. She noticed the disapproving look on Miriam’s face. “Oh, very well. Where’s the thermometer?”

Marla hadn’t seen an old-fashioned mercury thermometer in years, but then she rarely took her own temperature. “Open your mouth,” she ordered the old lady when she returned.

“Don’t you know anything? That’s a rectal thermometer.”

Marla’s nerveless fingers nearly dropped the instrument on the floor. “Excuse me?”

“You have to shake it down first. Look at the silver bar to get a reading.”

Marla shook the thermometer then peered at the instrument, but for the life of her, she couldn’t figure it out.

“You need to put some K-Y Jelly on first. You’ll find it in that same drawer.”

While Marla scurried to comply, she heard Miriam mumble, “If that gal is a trained nurse’s aide, then I’m twenty years old.”

Back in the bedroom once again, Marla squeezed the petroleum jelly around the thermometer’s tip. Uh-oh, I should have brought a tissue, she thought when it dribbled onto the bed linens. This is worse than that bikini wax I did in my first job as a beautician. She’d never forget the customer who’d demanded that particular wax job, and Marla had vowed never to repeat the experience. This holds a close second, she thought, perspiration beading her brow.

“Look, I can’t do this,” she confessed. “There has to be an oral thermometer in the house. They make those digital ones now.”

“Oh, forget it, dearie. I wouldn’t be getting so riled if I was sick. It makes me wonder, though, where you received your education.”

Did I really take temperatures that way in the old days? Things sure have changed for the better! I still can’t conceive of writing a humorous crime series about a nurse but at least my background in this field has proven useful. 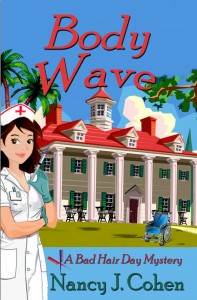 Leave a comment below for a chance to win a free ebook copy of Body Wave. Drawing will be held in one week and the winner will be announced here.