Weddings Can Be Murder
by Nancy J. Cohen

June is wedding month. For some reason, people like getting married before the heat of the summer sizzles their blood and sends temperatures soaring. But the passions aroused by planning a wedding also lead to some potential motives for murder. You’ve all heard of bridezilla? 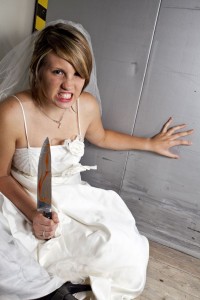 Don’t forget the rivalry between mothers of the bride and groom or jealousy among bridesmaids. I couldn’t help writing my own wedding mystery, Shear Murder. Not only does Marla Shore, my hairstylist sleuth, attend as a bridesmaid at her friend Jill’s wedding, but she’s in the midst of planning for her own upcoming nuptials to Detective Dalton Vail. So when she discovers Jill’s matron of honor dead under the cake table at her friend’s reception, she hopes the murder case won’t put a crimp in her own plans. Let’s see how members of the bridal party manage the pre-wedding pressure. Here’s an excerpt: 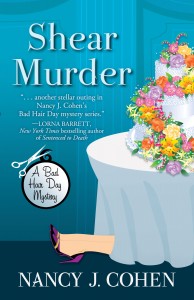 If these two women don’t stop arguing, one of them is bound to kill the other before the day is done. Marla Shore tucked her shears into a drawer before the leggy bride sitting in her salon chair grabbed them to stab her sister.

“Your nail polish looks like blood,” Jillian Barlow said to her sibling and matron of honor. “Why did you wear such a horrid red? It’ll clash with your dress.”

“Who cares? It’s not as if you gave us a choice with your color scheme,” Torrie Miller replied, staring into the mirror from the station on their right.

“I thought lavender gowns would go perfectly with the flowers at Orchid Isle.”

“So they will, for your bridesmaids. You made me wear plum. I don’t look good in dark colors.”

“It’s not your wedding, is it? Oh gosh, I’m going to be sick.” Bending forward, Jill clutched her stomach. Damp strands of blond hair clung to her face.

Marla picked up her blow dryer and twirled the chair around to face her client. “You’ll be fine, Jill,” she said in a patient tone. “You’re having pre-wedding jitters.”

Owner of Cut ‘N Dye Salon, Marla had done any number of bridal parties. She’d seen attacks of nerves ranging from throwing up to throwing a fit. This was no different, except the bride and groom were friends of hers. Marla’s bridesmaid gown waited in her Camry. She’d be heading to Orchid Isle along with the other wedding attendants right after their hair appointments.

So do you like romantic subplots when you read mysteries? It took Marla and Dalton ten books to reach the altar in my Bad Hair Day series. How do you feel about a couple getting married? Would you rather read a whodunit without any romance, or does it spice up the story for you?