I write all three, but what’s the real difference?

In a series, such as my Mapleton Mystery series, there’s one featured protagonist throughout the entire series. Think Harry Bosch, or Lucas Davenport, Elvis Cole, Joe Pickett—and of course the mystery authors here at Booklover’s Bench who follow a character, or set of characters throughout many books. Nancy J. Cohen has Marla Shore in her Bad Hair Day mysteries, Tina Whittle has Tai Randolph and Trey Seaver in her series, Maggie Toussaint’s Guardian of the Earth series has its recurring cast of characters, and Jim Jackson has Seamus McCree. These are true “series” books where each one follows the next, and generally are best read in order.

In connected books (popular in romance), there might be recurring characters that appear in several books, but for the most part, there will be a different hero and heroine. When I wrote Hidden Fire, I was clueless about the romance convention that the same characters couldn’t be hero and heroine in a second book, but I wasn’t done with Randy and Sarah—and I’d left their relationship open enough at the end of Finding Sarah so it was natural to pick things up where I’d left off. If J.D. Robb could do it, why couldn’t I?

So, my Pine Hills Police books are connected in place and with recurring characters, but they’re not really a series by definition. Same goes for my Blackthorne books, and my new Triple-D Ranch romantic suspense books. In our group, Maggie Toussaint also writes connected books, as does Karla Brandenburg. 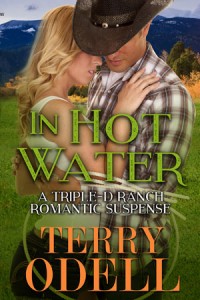 A subset of series would be spin-offs, where there’s some connection to a series, but that world isn’t the focus of the book. I did this with Nowhere to Hide, which followed a character from Finding Sarah across the country to a new home, a new life. In Hot Water, book 1 in my Triple-D Ranch books, has ties to my Blackthorne, Inc. books. However, in spin-offs, a reader doesn’t need to be familiar with one world to appreciate the other.

What about standalones? These books are totally self-contained. For me, that’s What’s in a Name? There are no connections to any of my other books, everything is resolved, and I haven’t revisited Blake and Kelly—although every now and then I wonder what they’ve been up to. Harlan Coben writes wonderful books, and each is a new experience for the reader.

What about you? Do you have a preference? Series, Connected, or Standalones? If you “meet” a new author and see there are 21 books in a series, do you start at book 1? Do you mind not knowing what’s happened before? For me, a book club chose book 18 in a series, and the only other book I’d read in that series was book 1, and I didn’t enjoy the left out feeling, and was confused by all the characters that had been introduced and described in much more depth as the series progressed.

Let me know in the comments—I’ll give one winner a choice of a download of any book 1 in any of my series, or my stand alone.