Flurries and Swirls of Life
By Tina Whittle 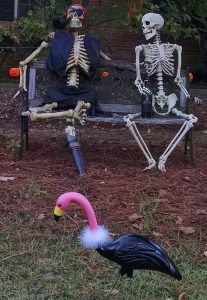 We celebrate Halloween really big here at Whittle Central. My husband is an aerospace engineer, and this is his chance to build something as intricate as an airplane, only twice as spooky. Because nobody wants their airplane rides to be spooky.

He sticks with the fun side of the holiday—nothing too scary—because one of the joys of the season is the trick-or-treaters who swarm our home. They delight in the skeleton horse with the flaming eyes and turquoise sombrero, oooh and aaah at the snakes twined around every vertical surface, jump and then giggle at the carnivorous trashcan that bites at them as they pass. They even pet the giant spider.

Adults are more suspicious. They worry that there must be more sinister things lurking below the surface. They expect jump scares. They cower prematurely, their eyes darting left and right, ever-vigilant against whatever chainsaw-wielding maniac might lurch from behind a sheet-draped tree.

And now the season is done, and we have put away the inflatable pumpkin and the pirate skeleton and the scarecrow with the glowing head. The yard is as messy as a post-Margi Gras parade. We will spend several days cleaning it up, returning order to the mayhem. And we will settle into the darker, colder days and longer nights of the coming autumn and winter.

I think about this pattern as I ponder my work as a writer. I have just turned in the final edits on Necessary Ends, the sixth in my Tai Randolph/Trey Seaver series. The flurry of creation is done, the feverish final proofing finished. The deadline made. And now I ponder the emptiness before the next beginning.

As I sweep up candy wrappers and put away the lights, I look forward to the upcoming quiet moment in my creative life. No deadline. Not even a first word yet. I can feel ideas swirling, but for now, I let them swirl.

While you’re at Booklover’s Bench, check out our November contest. From Nov. 1-18, we’re accepting entries for our $25 Amazon or B&N gift card. ENTER THE CONTEST