When the Crime Really Happened

Most of my books have been inspired by actual events I’ve read about, either crimes or human-interest stories. They become the seeds that germinate in my creative juices, eventually sprouting plots. Forget the disclaimer at the beginning of each Law & Order episode. Anyone who’s a news junkie can tell you which real-life event inspired each episode. However, unless I mention it during a talk, an interview, or a blog post, no one would be able to pinpoint what originally inspired each of my plots. 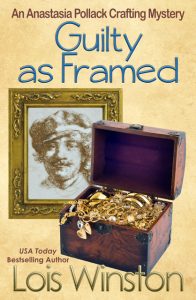 For Guilty as Framed, the eleventh book in my Anastasia Pollack Crafting Mystery Series, I’ve set the plot around a yet unsolved crime that took place in 1990. For years I’ve been fascinated with the burglary of the Isabella Stewart Gardner Museum in Boston. It’s still considered the largest art heist in history, and to this day, not only haven’t the perpetrators been caught, but none of the artworks have ever been recovered. Worst of all, many of the suspects have since died.

I’ve read countless articles and watched several documentaries about the theft and subsequent investigation to find the thieves and missing artworks. With each, my fascination has grown, as has the itch to incorporate this crime into one of my mysteries. I may not be able to solve the mystery of the missing paintings, but I became obsessed with solving the puzzle of how I could tie a factual thirty-two-year-old crime in Boston into the plot of a contemporary cozy mystery series that takes place in New Jersey.

My eureka moment was anything but a eureka moment. I just started writing, and as I wrote and continued to research the theft, min-eureka moments began to pop into my brain. In the end, I came up with a story that uses various events from the actual crime, making them plausible within the pages of my story by taking some authorial liberties. After all, I’m writing fiction, not true crime, which also enabled me to invent several characters for the purpose of advancing my plot.

In addition, I’ve changed the names of suspects and their relatives, whether they’re still alive or not, to protect the innocent, the not-so-innocent, and yours truly. Like my amateur sleuth, I may be a Jersey girl, but I’ll leave tangling with the mob to Anastasia. I only want to deal with fictitious mobsters.

What about you? Do you enjoy mysteries that incorporate real-life events? I’d love to read your comments about this!

When an elderly man shows up at the home of reluctant amateur sleuth Anastasia Pollack, she’s drawn into the unsolved mystery of the greatest art heist in history.

Boston mob boss Cormac Murphy has recently been released from prison. He doesn’t believe Anastasia’s assertion that the man he’s looking for doesn’t live at her address and attempts to muscle his way into her home. His efforts are thwarted by Anastasia’s fiancé Zack Barnes.

A week later, a stolen SUV containing a dead body appears in Anastasia’s driveway. Anastasia believes Murphy is sending her a message. It’s only the first in a series of alarming incidents, including a mugging, a break-in, another murder, and the discovery of a cache of jewelry and an etching from the largest museum burglary in history.

But will Anastasia solve the mystery behind these shocking events before she falls victim to a couple of desperate thugs who will stop at nothing to get what they want?

19 thoughts on “When the Crime Really Happened”