In Celebration of International Friendship Day
By Lois Winston 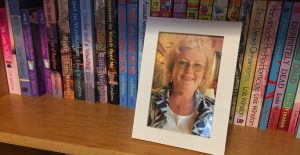 Today is International Friendship Day, so I’ve decided to devote my post to my oldest friend and tell why she meant so much to me.

I grew up in the early years of television, but my home life was nothing like what I saw portrayed on Father Knows Best or Leave It to Beaver. Without going into gruesome details, suffice to say my parents never should have had children, let alone four of them.

We moved from the city to the suburbs when I was eleven. I started junior high the same day as all the other incoming seventh graders from four elementary schools. I knew no one. Friendships were long established, and no one seemed inclined to include the new girl.

Junior high schoolers can be some of the cruelest humans on earth, and I quickly found myself the target of the mean girls. Lunch period was the worst. One brave girl named Janice saw how I was being bullied and had the courage to invite me to sit with her and her friends. We quickly became good friends. Her home became my second home, and in her family, I discovered a family that was pretty much like the ones depicted on television—filled with love, not abuse.

Janice and I lost touch after high school graduation. She attended nursing school in New Jersey, and I went off to college in Pennsylvania where I met my husband and remained until 1998 when a job transfer brought me back to New Jersey. About a year later Janice and I found ourselves seated at the same lunch table when another author brought her as a guest to a writing organization I belonged to.

Our friendship picked up as if the intervening years had never occurred. We were each other’s oldest friends, and she took delight in pointing that out to everyone—whether friend, relative, or total stranger. She also took great pride in bragging to people about my books and how I’d named a character after her. She loved to read mysteries and romance and several times traveled with me to writing events because she loved being around authors. A photo of her sits on a shelf with some of my books.

Janice died a year ago last April 30th after a grueling eight-month battle with cancer. I spent much of those months taking her to doctor appointments, chemotherapy treatments, and visiting her during her many hospital stays. It was my way of giving back to her for all she had done for me decades before. She offered me friendship when I needed it most, and I’ll forever be grateful to her for that and for having the chance to rekindle our friendship over the last twenty years.

Have you ever had a friend who dramatically changed your life? Post a comment for a chance to win an ebook copy of any one of my books. Find them all on my website at www.loiswinston.com.