I’m a huge fan of reading books set familiar settings. I grew up in Los Angeles, and love following Michael Connelly’s Harry Bosch, and Robert Crais’ Elvis Cole as they cover my old haunting grounds. I recently read a book set in Albuquerque. I’ve visited the city on several occasions, and I enjoyed seeing landmarks I remember.

But what about writing? When I started writing, I wanted to set my story someplace I considered more interesting than where I lived at the time. I chose the Salem, Oregon area, since we have relatives there, and I’d been there a number of times. I based my Pine Hills Police series on that setting, but created my own town of Pine Hills. This gave me a little more freedom to make stuff up, but I still wanted the details right, so I was hounding my sister-in-law with questions about what street trees were blooming in May, and she vetted the book, fixing mistakes of other misplaced flora. I decided it might be easier on both of us if I set a book where I lived, so I took Colleen, one of my Pine Hills Police characters and moved her to Orlando for Nowhere to Hide. This would be easy. All I had to do was look out the window.

However, instead of making up a town, I had the hero of the book working for the Orange County Sheriff’s Office. Now, I had to get all the details right, which became a lot harder. I talked to a friend who was a SWAT Commander for the Sheriff’s Office and asked what color the walls and the carpet were at their headquarters. He said, “I don’t know” (even though he’d worked there for years), but he invited me down for a tour, which was cool.

I did create some new places, such as a restaurant—and the one real restaurant I used closed before the book was published, so readers might think that one was made up as well.

I decided I much preferred the “based on” rather than the headaches of being totally true to the location, so my Colorado books are set in imaginary towns. Readers familiar with the area might recognize landmarks, but—let’s just say, “the names have been changed to protect the innocent.”

What’s your take on setting? Do you like books to take you to new places, or do you like to visit places you’re familiar with for that “coming home” feeling? What are some books you’ve read and enjoyed the setting?

Leave a comment, and you can win a download of Rooted in Danger, my third Blackthorne, Inc. romantic suspense which contains fictionalized versions of my neighborhood in Los Angeles, as well as some Oregon settings we visited on vacations. 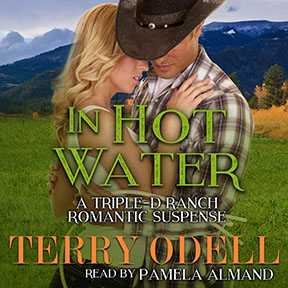 And, for audio book lovers, you can enter my Rafflecopter contest for a free coupon for my newest audio book, In Hot Water

No purchase is necessary. You must be at least 18 years old to enter. By submitting your entry, you agree to be entered into each Booklover’s Bench author’s email newsletter list, as well as the list of the host of this contest, if different. We will not share your information with anyone else, and you may unsubscribe at any time.

Winners will be chosen by Rafflecopter from all entrants for the prize. Winners will be notified by email. Booklover’s Bench authors are not responsible for transmission failures, computer glitches or lost, late, damaged or returned email. Prizes must be claimed within 5 days or they will be forfeited.