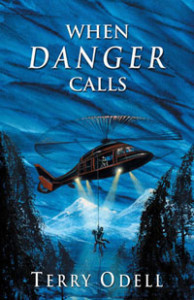 Last time, I shared my interview with Frankie Castor, who was auditioning for a role in When Danger Calls. I figured it was only fair to show you the interview with Ryan Harper who was looking for work as an action-adventure romance hero.

As soon as he opens the door to my office, I’m sure there’s been a mistake.

I check the list my secretary gave me first thing this morning. No mistake. Number five just left, and number six is definitely Ryan Harper. I give him my, Thanks for coming smile. The one that I normally flash as they leave, not when they enter. But to be fair, I should hear him out.

I motion him inside. “Come in. Have a seat.”

He’s certainly tall enough, over six feet, but as he crosses to the client chair at my desk, he’s favoring one leg. Still, there’s nothing hesitant about the way he walks. Strides, actually, limp and all. Interesting. He’s got a scruffy full beard, and his hair hangs in unruly brown tendrils over the collar of a neatly-pressed blue oxford cloth shirt. His jeans, also neatly-pressed, bunch at the waist under his belt, which clearly has been tightened a notch. He grasps the arms of the chair and eases himself into it. I see his jaw clench.

I try to keep my expression neutral, my voice pleasant, but I know he’s aware I’ve noticed the pain he’s tried to hide. “Mr. Harper, you’re aware this position is for an action-adventure romance hero, right?”

“Yes, ma’am.” He stretches his legs in front of him. There’s a faint pallor under his tan. His gaze meets mine, and my heart does a quick flip. The weight of the world sits behind those whiskey-colored eyes. thoughts of finishing ahead of schedule and an early lunch vanish. I fumble for a pen.

“What made you apply for the job, Mr. Harper?”

“Ryan.” I’m tempted to return the first-name invitation, but I normally reserve that for my characters after I hire them. “I have to be honest. You’re not exactly what readers expect when they meet the hero in one of my books.

His eyes never leave mine. He runs his hand across his beard. “I’m just back from an assignment. Things didn’t go so well, and frankly, my boss insisted I take time off. Lying around the beach didn’t appeal, and there were some … issues. I resigned. I saw your ad. I’ve had a lot of experience in the action-adventure realm.” He rubbed his knee. “That’s how I got injured.”

“What kind of an injury?”

“Nothing permanent. Just my knee. It’s healing fine. I guarantee it won’t interfere with the job.”

I’ll be the judge of that. But his erect posture, the set of his jaw say he’s right.

“All right, we’ll assume the knee is a minor inconvenience. Tell me about yourself. Where you grew up, education, work history, your whole backstory.”

The first glimmer of a smile appears at the corners of his mouth. “I grew up on a ranch in Montana. Horse ranch. Older brother, younger sister. I started college, dropped out to join the Navy. Did a couple of years as a SEAL, then went to work for … for a high-end San Francisco security company.”

Quite a bit of hopping around. I don’t need quitters in my books. “What made you drop out of school?”

Sadness flashes across his face, quickly controlled. “My mother died. I needed to get away for a while.”

“And this company?” I ask. “What were your duties?”

“Just about anything.” He lifts his gaze to the ceiling as if searching for the right response. Shrugs. Leans forward. Lowers his voice. “But, you see, there’s a covert side. I can’t talk about it much, but we do a lot of hostage rescue, go places where our government doesn’t want to get involved, either for political reasons, or because to them, what the client wants is just small potatoes.”

My pen seems to be writing notes of its own accord. Plot points appear on my pad. He waits. I go down my checklist. “Married?”

“No, ma’am. My job takes me away at a moment’s notice.” He sucks in a breath. “Took me away, I guess, since I’m not working there anymore. But it never seemed fair to ask someone to accept that kind of a life.”

“That’s right. We’re all trained across the board, but we each have specialties.”

“No, ma’am I don’t. Frankly, it sickens me, but there are times when it’s the only way. The world has an ugly side.”

“All right, then let’s get to the other side. This is an action-adventure romance novel, and everything happens on the page. Everything. Do you have any problems with that?”

He gives me a sheepish grin. Suddenly, I wonder what he’ll look like when he shaves. “None at all.”

I scribble another note. “Dogs?”

“We had an Irish setter when I was a kid. Rusty. I’m good with dogs.”

“I was thinking German Shepherd.”

He looks at me, a puzzled expression on his face. “Children?”

“You’d be working with a single mother. She has a five-year-old daughter. Can you handle it?”

For the first time, I see something akin to fear cross his face. He closes his eyes for a moment, then gives me an even stare. “Not a problem.”

Definitely a problem. But that’s going to be his problem, not mine. I glance at my list of potential conflicts for his character and put two asterisks by that one.

I stand and offer my hand. “Thank you, Ryan. When can you start?”

He gets to his feet. Slowly. Smiles and shakes my hand. A warm, firm grip. A working man’s hand. “Any time, ma’am.”

His smile is a genuine grin now. “Terry. Thank you.”

“If you’ll stop by my secretary’s desk, she’ll have the necessary paperwork.”

He heads for the door. I watch him leave. The limp is barely visible. Or am I distracted by the view? I wonder if Frankie Castor will enjoy it as much as I do.

You can read the complete novel, When Danger Calls, as a free download from any of these e-bookstores. 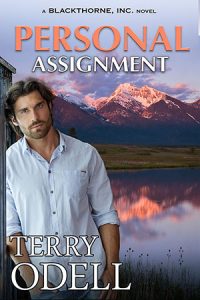 And don’t miss the latest installment in the Blackthorne, Inc. series, Personal Assignment.