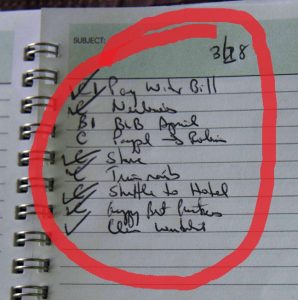 I am a list-maker. Regardless of whether I became one through genes or social training, I owe this trait to my father. Lists come in two forms: the recording (events, transactions, possessions) and the “to do” list or check list.

Each Saturday morning, my father recorded the value of each stock he owned (and used blue and red pencils to graph whether he was making or losing money on the stock). He kept a notebook in the car to record miles driven between gas fill-ups and how many gallons the tank took. (In those days, a decrease suggested we should check the tire pressures or perhaps schedule the car for a needed tune-up.) He had bird lists by year, state, some individual parks, etc. He kept a list of all the scientific papers he authored or co-authored. Another list contained papers he had peer-reviewed; another for books he had reviewed for journals. When he died, I knew where to find insurance policies, burial instructions, etc. because, of course, they were all included on a list.

I, too, keep a bunch of bird lists and watch my automobile gas mileage. I also keep track of all the books I read and maintain an inventory of our library, including where a book is located since we have both northern and southern homes. Even in retirement, I create monthly, weekly, and daily to do lists. I’ve found check lists to be increasingly important to me. I have one for closing our house up north, another what to take between houses, etc. So far on my current Hawaii trip (late March, when I am writing this), I have twice managed to leave my cell phone behind.

On the way to the airport from home, I remembered the phone was plugged into the charger to prepare for the long flight. Since the phone was at the end of its life, , I bought a new one as soon as we arrived in Honolulu. And left that behind at the home of friends we were visiting in Hilo. They Fed-Exed it to my next hotel, so we are reunited.

I’m working on a new checklist to include everything I need to remember before leaving ANYWHERE. How about you, are you a list-keeper?

ps Remember to sign up for our April giveaway! The $25 gift card this month could have your name on it! Click to Enter