Do you have a pet?
by Karla Brandenburg 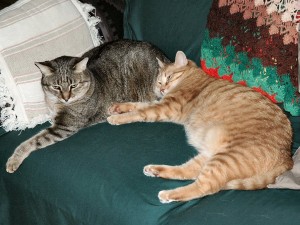 Pets play an important part in our lives, and even if all haven’t adopted one, we generally have sympathy for some kind of animal. (Don’t ask me about my son and baby hippos). I grew up with and still have cats, which are often featured on my Facebook and Twitter pages. They are a source of entertainment and comfort. Some people prefer dogs.

I had two cats up until a couple of years ago, when the older one died. When we took in the younger one (abandoned in a dumpster), the older one showed her the ropes. How to behave. As much as he was a very well-behaved cat, he was a terrible big brother. He used to torment that little one every chance he got. He’d wait for her at the bottom of the steps, just out of sight, and when she came wandering down all nonchalant and looking for him, he’d jump out at her, sending her vertical. And then she’d hide for days on end because she’d been so traumatized. Or they’d run in circles, until the older one would stop and wait for her to come around the corner. Same story. Little Cat goes vertical and is traumatized for hours and sometimes days. Think about all those cucumber videos with cats. Hilarious to watch, but you can’t help but feel sorry for the “little sister” getting teased and picked on.