No Tricks, Just a Treat
By Terry Odell 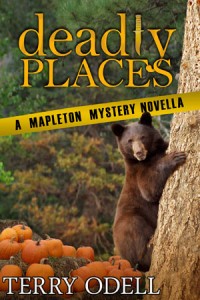 My Halloween treat for you is a free download of my Mapleton Mystery novella, Deadly Places.
Here’s a bit about it.

Life is a balancing act. When you’re a cop, the choices can be deadly.

Ed Solomon, long-time police officer in the small town of Mapleton, Colorado, has been ribbed for thinking there’s a ring of assassins out killing deadbeat dads.

However, he’s convinced these killers exist and they’re doing their dirty work from behind an innocuous-looking travel blog. Proving the ring exists has been a sideline investigation for him, but it’s shoved further onto the back burner when Ed is forced to assume the duties of Chief.

Ed loves being a cop, but the Chief Stuff is getting him down. He’s juggling his own police duties, mounds of paperwork, and keeping the mayor happy. With all the extra hours, family tensions are on the rise as well. But when someone leaves an anonymous message for him at the station, handing him a new clue, he’s determined to prove these assassins exist. Setting up a sting operation by posing as a deadbeat dad makes Ed a target. Will he catch the assassins before he becomes their next victim?

To get your free download, just click this link and you’ll be taken to a page where you can choose a mobi file (Kindle), an epub file (most other e-readers use this format), or a PDF which you can open on your computer. 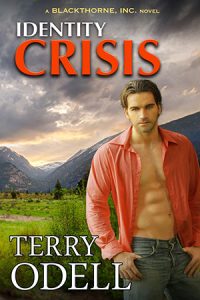 Meanwhile, I’m working on another Mapleton novella that takes place at the same time as Deadly Places, so I don’t know what you’d call it. It’s not a prequel or a sequel. I don’t know if there’s even a name for that kind of simultaneousness in books. Any ideas? At any rate, the working title is Deadly Engagement, so keep an eye out for its release.

In other news, my latest release is Identity Crisis, which is Book 7 in my Blackthorne, Inc. series. I hope you’ll check it out. I’m donating a portion of my October royalties to the National Multiple Sclerosis Society, in honor of my daughter.

(Oh, and I almost forgot. Silly me. Book 1 in the series, When Danger Calls, is now FREE everywhere!)