When Research is Too Much Fun

Last time, I talked about throwing out the “Write What You Know” rule, and mentioned writing what you can learn. Sometimes, we authors get to have Too Much Fun doing just that.

I recently attended a conference devoted to helping writers get it ‘right’ with all things related to law enforcement and first responders, The Writers’ Police Academy. This year, it moved to a new venue, the Public Safety Training Center, part of the Fox Valley Technical College. 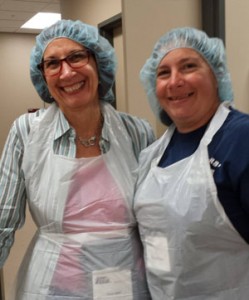 Here, authors take workshops given by the pros in the field, and often these workshops include ‘gowning and gloving up’ to learn how to do presumptive tests for blood. The big difference is that we’re not using real blood, but we get to learn how to use the field kits, and how to use blood spatter evidence to determine what really happened at a crime scene. (And did you know even if you’re wearing latex gloves, you can leave fingerprints behind?) 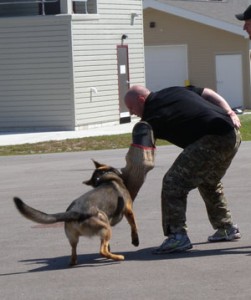 We get to meet K-9s and their handlers, and watch them in action. There are shooting simulations, rescuing people from “burning” (smoke-filled) buildings, breaching buildings, and this campus is adjacent to the Appleton Airport, and there’s a real 727 parked at the edge of the center, as well as an entire mockup of a small town. Workshops by a NYC undercover cop, another by a Secret Service agent – where else can you find all these experts in one place? I definitely came home with brain overload. 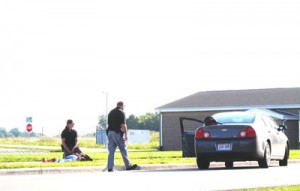 When we were there, it was the last day of the cadets’ training, and they were running traffic stop scenarios, all visible from the classroom windows (or, if you wanted to, you could go outside and watch from a closer vantage point). We saw a recreation of taking down a bank robber who was fleeing the scene, a fire department rescue of a man who’d had a heart attack while he was on an inaccessible trail in the mountains.

It’s one thing to read the facts, it’s another to talk to experts, but hands-on is fantastic.

Obviously, if you’re writing time-travel, it’s going to be a little harder to do your homework hands-on, but for crime novelists, this is golden.

Now, if we could just convince our readers not to assume what they watch on television is the way it happens in real life! Because now, we all know better. 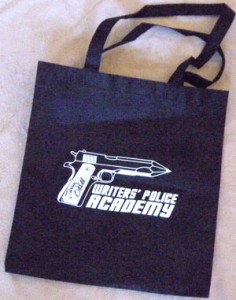 I’ve got a Writers’ Police Academy Totebag (autographed by me) for one commenter. (US only; international winners can choose a download of one of my Mapleton mysteries.) Just tell me what kind of a ‘hands on’ research trip you’d like to take, or one you’ve taken. (Doesn’t need to have anything to do with writing – just a place you’d like to go to learn something new.) This contest is now over – thanks to all who entered, and to the winner, Elaine Roberson.