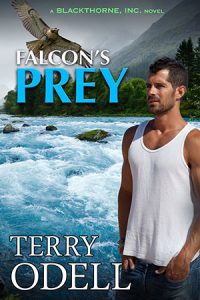 I’m excited to announce the release of Falcon’s Prey, Book 8 in my Blackthorne, Inc. series. It’s an action-adventure/covert ops/romantic suspense (I always had trouble staying inside boxes!).

When I wrote Identity Crisis, Book 7 in the series, the hero, Brett “Scrooge” Cashman, had been left to handle things on his own because the rest of the team had been sent on “an op.” Falcon’s Prey starts out with that op, because I wanted to know what they’d been doing, and I thought readers might, too.

After I wrapped up that op, it was time to give Marv “Fish” Frisch his starring role. And if you want to see an amazing “small world” story, you can find it here. In Falcon’s Prey, Fish is paired with Lexi, and they have a history dating back to when they were partners on the Indianapolis police force. A lot of water has passed under that bridge, and it’s time to see if they can rekindle a relationship that never happened. (Lexi was married.)

I hope you’ll give Falcon’s Prey a try. If you do, you’ll also be helping a good cause. My daughter was diagnosed with MS about 4 years ago, and I’ll be donating a portion of all June royalties to the National Multiple Sclerosis Society to help find a cure.

Buy it from these digital stores.

Prefer print? Get it here.

Heroes aren’t fearless. They just don’t let fear get in the way.

Police officer Lexi Becker is being targeted. When her husband was murdered three years ago, Lexi moved to a small town to get away from the memories, to get away from the pain. But she can’t get away from the gut feeling that a drug lord, known only as the Falcon, was responsible for her husband’s death. As she quietly conducts her own investigation, it becomes clear to Lexi she could be the Falcon’s next victim. Afraid her local police department has been infiltrated by the Falcon, she turns to the only man she can trust for help: her former patrol partner.

When ex-cop Marv “Fish” Frisch is assigned bodyguard duty instead of a covert ops assignment, he fears he’s being punished for a failed training mission. The last assignment he expected was Lexi Becker. Now he’s forced to deal with the attraction he felt when they worked together. As they go into hiding, Fish can’t keep his feelings hidden from Lexi. It seems she feels the same, but danger is everywhere. Someone’s bugged her house. An illegal opioid network. People dying. And an even more sinister plan is being put into action…

Torn between hiding or coming to the aid of an orphaned child, Lexi leaves Fish’s protection. Now she’s on her own, a prime target for the Falcon…unless she can outsmart him. Will Lexi survive long enough to tell Fish how she feels?