Where do Ideas Grow? 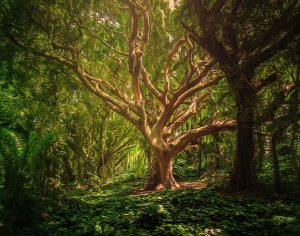 Based on my post last April, when I asked readers what they’d like to ask authors, the most common question was “Where do you get your ideas?”

I don’t know about any other authors, but I just go out to my yard and pick one off my idea tree. Sometimes, they’ve fallen to the ground and are past their prime; others still on the tree aren’t ripe enough to use.
Okay, so maybe that’s a bit of a flippant answer, but for me, ideas are everywhere. It’s turning them into a story that my challenge.

With Finding Sarah, it was all about exploring the characters. I had a hero, a police officer, who saw everything in black and white. The law was the law, and there were no gray areas. I wanted to see what it would take to push him over the line, into that field of gray, and further, to the point where he would walk into his chief’s office and turn in his badge and gun to do something that didn’t follow the letter of the law. Since it was a romantic suspense, the obvious choice was to have him fall in love with a woman—someone involved in a case he was investigating—who was therefore totally off limits.

And, because it was a romance, the heroine needed her own goals and conflicts, and they needed to be the opposite of the hero’s. She, for the first time in her life, found herself totally on her own, and she insisted on doing everything herself, so she wanted no part of anyone helping her, and that included the police officer who insisted she was in danger.

In other cases, I’ve wanted to incorporate my own experiences into a story. In When Danger Calls, I set the story in Montana after taking a brief vacation there and going on a trail ride. That certainly wasn’t enough for an entire book, but the hero grew up on a ranch in Montana, and he goes home and helps his father whose business is now providing horseback riding experiences for tourists.

And sometimes, it’s just a line that nags at you until you can use it somewhere. For “Redshirted,” the first story in my Seeing Red collection, I wanted to use the line, “He’s dead, Jim.” And that line triggered the entire story, which then triggered two more featuring a Florida homicide detective.

This is my answer to the “Where do you get your ideas?” question, and I’m sure there are as many answers as there are authors.

Any more questions for us here at Booklover’s Bench?