Groundhogs and winter
by Tina Whittle 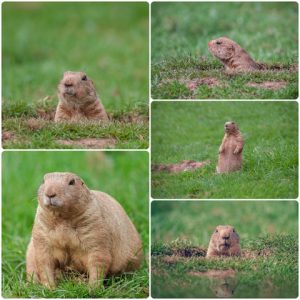 At some time this morning, Punxsutawney Phil–perhaps the most famous rodent in America (not counting a certain mouse in Orlando)–will come out of his burrow and perhaps see his shadow. If so, there will be six more weeks of winter. If not, then an early spring is on the way.

This odd tradition has its roots in a Pennsylvania German custom that began in the 1700s, which comes from even older origins in ancient European weather lore associated with the Gaelic festival of Imbolc, which marked the first day of spring. In these traditions, weather divination was performed to determine how much longer the winter would last. And while some of those traditions used badgers or bears or hedgehogs as the fortune-telling animal, in the US we rely on the groundhog, Marmota monax.

Also known as a woodchuck or whistlepig, the groundhog is for all intents and purposes a very large squirrel. And it ranges far beyond Pennsylvania, all throughout North America, even as far north as Alaska. Punxsutawney Phil has lots of prognosticating cousins all over the country, including Buckeye Chuck in Ohio, French Creek Freddie in West Virginia, General Beauregard Lee in Georgia, T-Boy the Nutria in Louisiana, and Nibbles in North Carolina.

Groundhogs have a highly developed sense of seasonal timing. If babies are born too early, the mother won’t have enough food for them. If they’re born too late, they won’t gain enough weight to make it through the next winter. For groundhogs, knowing when spring will finally arrive is crucial to the survival of the species. I think that makes them pretty trustworthy as weathermen.

But regardless of what the groundhogs say this day, know that spring is indeed coming, and that it will make its way to you in its own sweet time. As for me, I’ll be using the rest of February to curl up with a couple of good books. I think Phil and company would approve.

How about you? What are you planning for the last days of winter?

ps Be sure and click over to enter our Samsung Galaxy Tablet giveaway that runs Feb 1-18.