Technically, everything that occurs before a novel is published could be included in the broad definition of pre-launch. The demarcation line for me is the point my efforts switch from making the manuscript the best book possible to letting people know the book exists. I take off the writer hat and put on the promoter hat. Ugh.

But one aspect of promotion I do enjoy is showing off the book’s cover. And here is the big reveal for Booklover’s Bench readers of the Doubtful Relations cover. 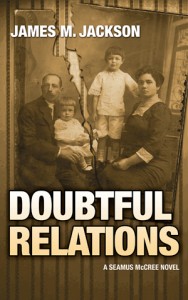 In this fourth book in the series, Seamus McCree’s ex-wife’s husband goes missing, and she convinces Seamus to help find him. Soon the whole extended family is involved. We all have stories about family relations, don’t we? I chose a sepia chromatic approach to hint that the McCree family fractures go back a long time.

But I’m curious. How do you decide which of the gazillion offered books you want to read?